Only one copy available

Originating from a private collection at

with a signed certificate of provenance.

This is a unique copy of this exceedingly rare work.

Fine and unmarked condition, excellent and presented in a fine custom made solander box, silk linings, custom marbled paper, titles hand gilt and with blind tooling of the seals and sacred implements of the high magicians art.

Originating from a private collection at

with a signed certificate of provenance.

This is a unique copy of this exceedingly rare work. Both the book and its solander box are hand bound in dark plum polished goat skin, top edge gilt, original page edges untrimmed.

Fine and unmarked condition, excellent and presented in a fine custom made solander box, silk linings, custom marbled paper, titles hand gilt and with blind tooling of the seals and sacred implements of the high magicians art. 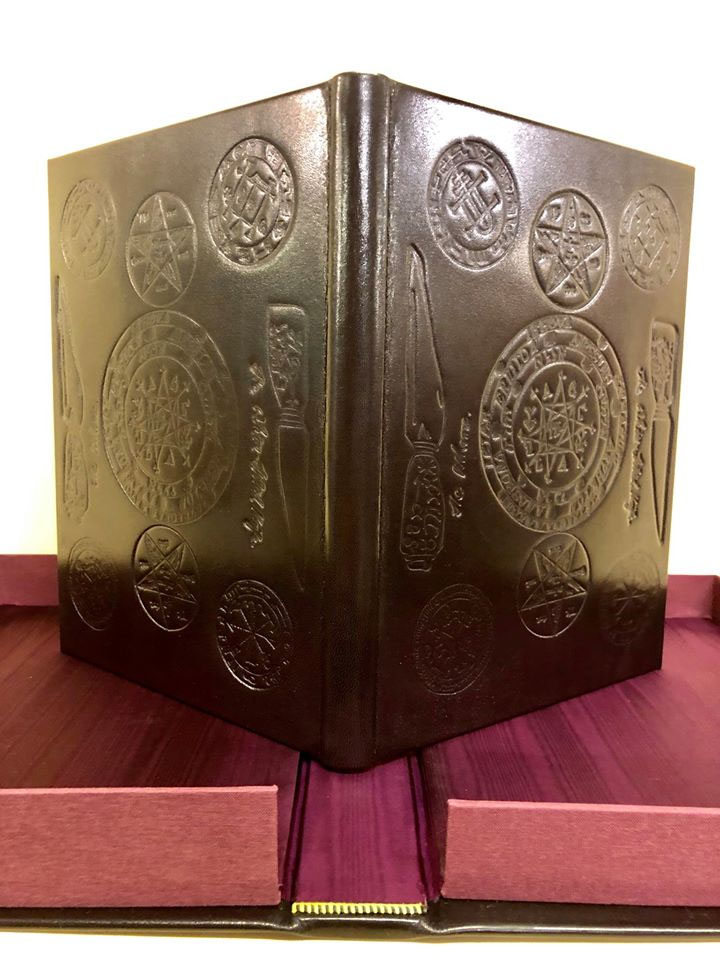 The unique fine bound copy of the Key of Solomon, published by George Redway in 1889 and presented in its own custom made silk-lined solander box 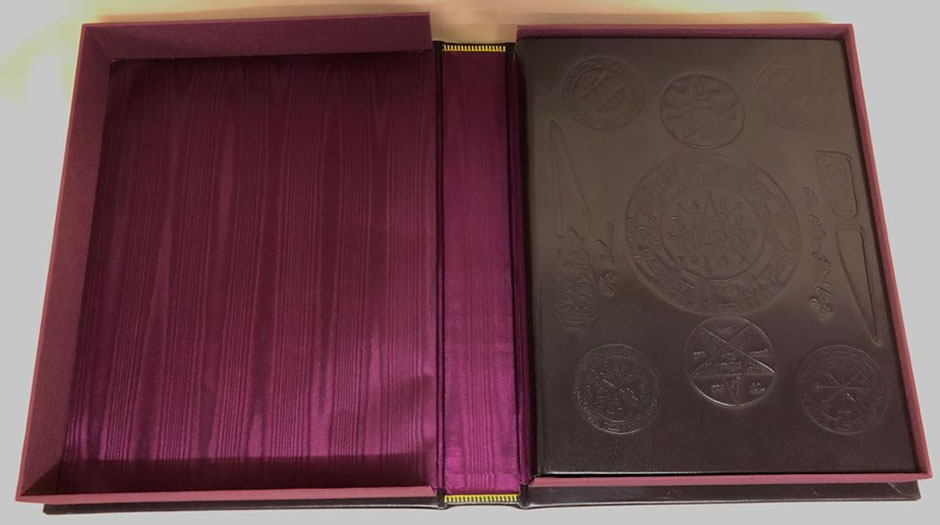 The Solander box with six raised bands, titles gilt to third compartment, date to fifth compartment, with a magical seal of ‘Tetragrammaton’ embossed in gold to the front. 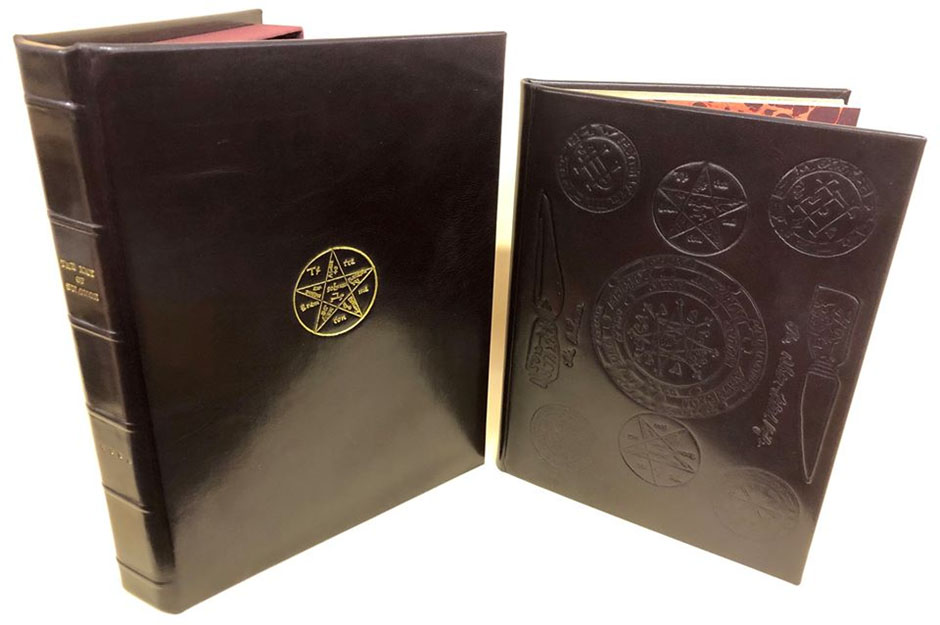 The 1889 title page of the unique copy 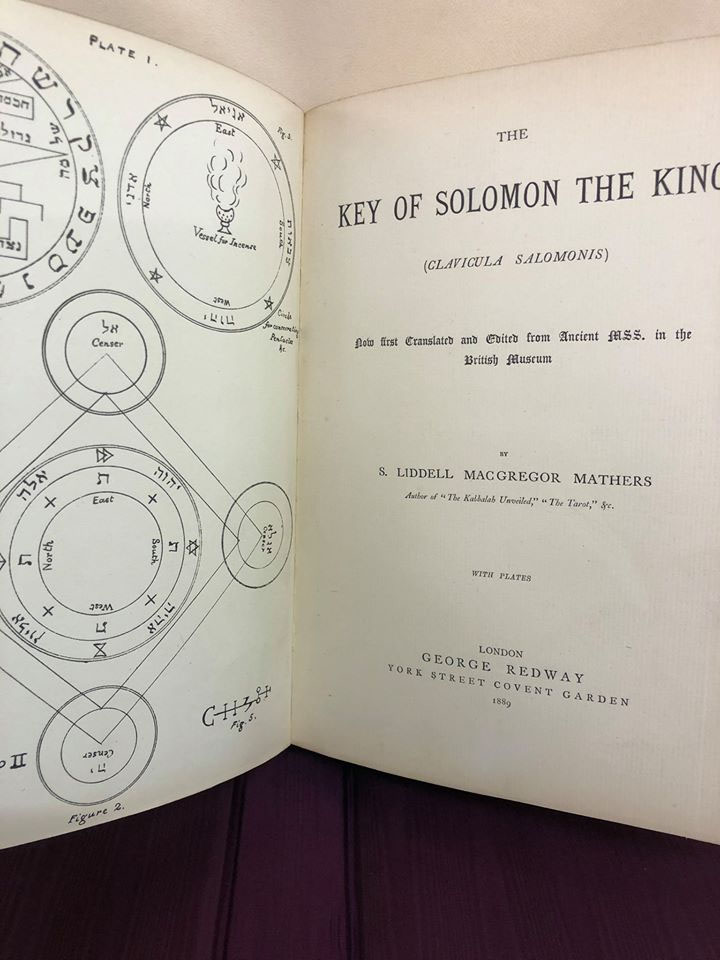 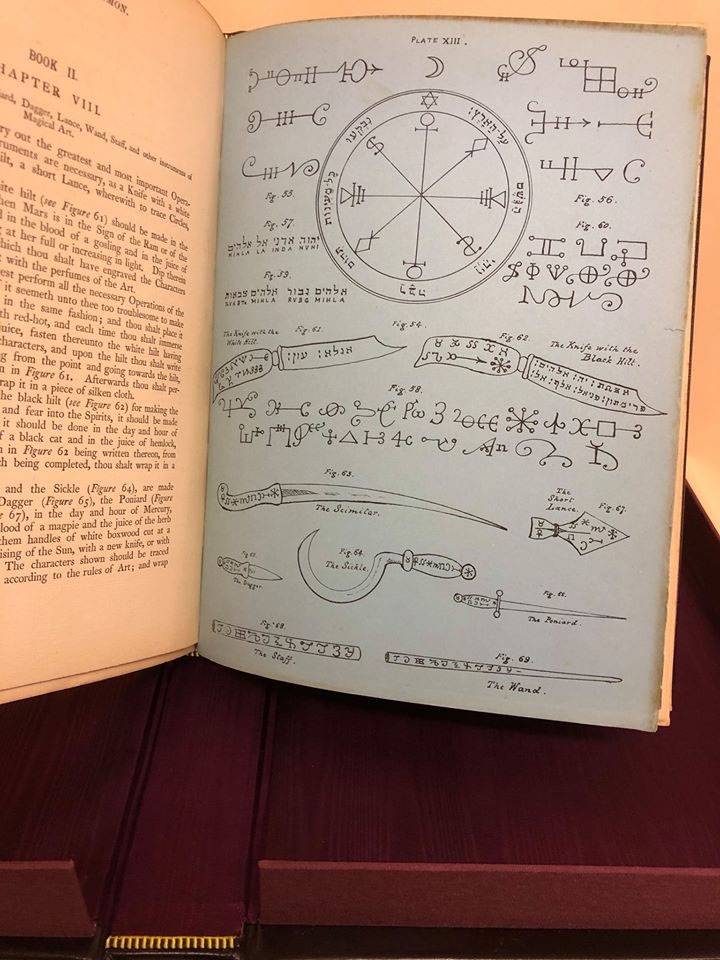 Mathers original edition of 1889 is a very rare work, this copy is complete with all the original engravings of seals including the famous ‘blue pages’ detailing and describing the essential tools of the high magicians art, a true collectors piece finely bound from a private collection at The Hell Fire Club. 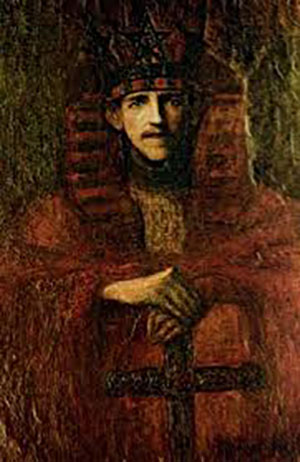 When S.L.MacGregor Mathers first published ‘The Key of Solomon’ in 1889 it was produced in a simple binding not to a fine standard but by a stationers company: the red leather spine with green cloth and simple titling all denote a humble production, possibly one aimed at not exciting too much attention. Only 500 copies of Mathers book were produced and it soon became a legend in occult circles. 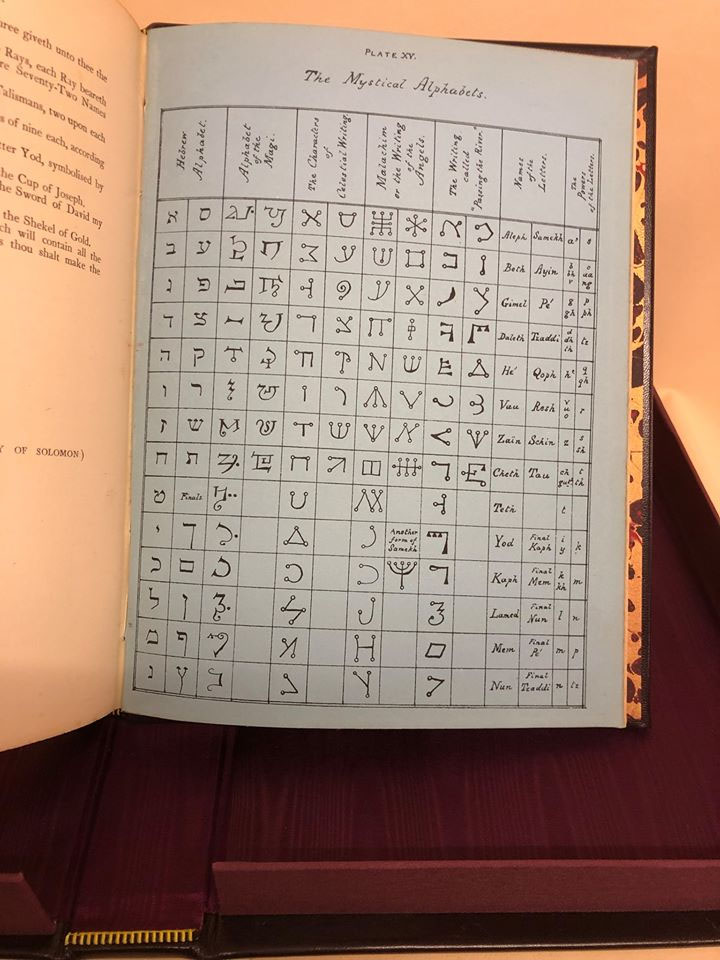 Working from Latin copies in the British Museum and inspired no doubt by the intense work he was doing preparing the Golden Dawn for its birth in the world, Mathers produced what must truly be called the first exacting modern grimoire: a text book of the high magical art that was both scholarly and focused upon the practical application of the magical seals and conjurations.

What is most extraordinary about the work is its own talisman-like quality: studded with occult seals precisely drawn, radiant with Mathers own learning in the Kabbalah and voicing without fear or apology the doctrines of the adepts and his own absolute belief in them. The first edition of ‘The Key of Solomon’ acted as the catalyst for the explosion of practical occultism in the late 19th century and its effects are still being felt throughout esoteric circles today. 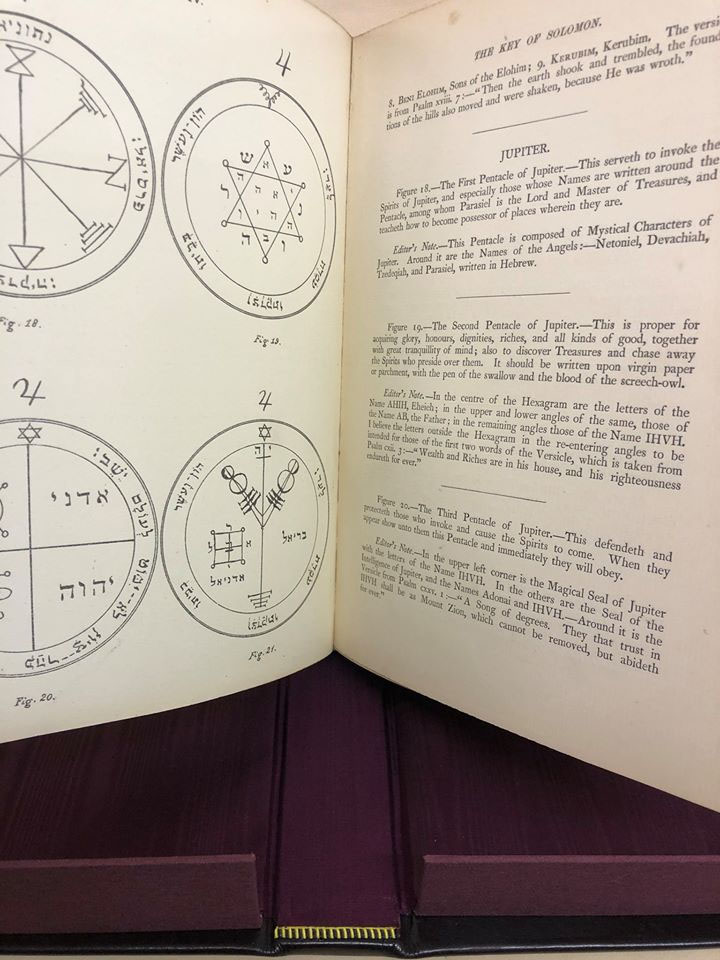 It could be said that the supreme efforts involved in producing his published works: the Key of Solomon, the Sacred Magic of Abramelin, the Grimoire of Armadel as well as the Kabbalah Unveiled, marked Mathers as the pre-eminent mage of the late 19th century and produced the power needed to establish the Golden Dawn in the world and thus root the magical knowledge of the Adepts forever in the minds of men. 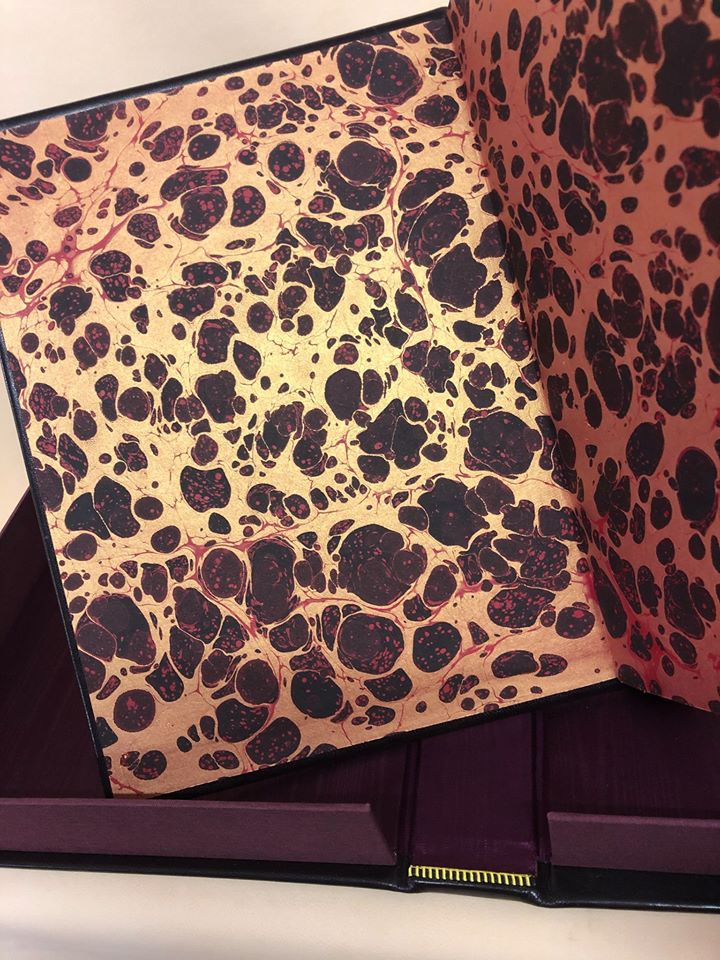 The beautiful marbled endpapers of plum, red, copper and gold.

Samuel Liddell MacGregor Mathers (8 January 1854 – 20 November 1918), is primarily known as one of the founders of the Hermetic Order of the Golden Dawn, a ceremonial magic order of which offshoots still exist today.

Mentor and initiatory master to the young Aleister Crowley, Mathers established his Hermetic Order of the Golden Dawn in England and later Paris, it remains the pre-eminent system of occult teaching to this day.