The Keys Of Rabbi Solomon. Ltd to 42 copies

This rare manuscript of magical art circa 1830 is from a private collection. Previously inaccessible to scholars it is presented here for the first time as a facsimile in three exclusive limited edition formats.

The Keys Of Rabbi Solomon circa 1830

Translated accurately from the
Hebrew into English by Edward Hunter

The manuscript is presented here for the first time, edited and introduced by Travis Shores,
with additional notes supplied to him courtesy of Professor Brigid Burke Monash University,
and Professor Teresa Burns University of Wisconsin.

This format is limited to only 42 deluxe hand gilt copies 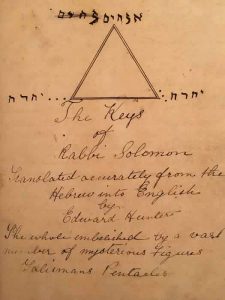 The original manuscript has remained unseen and safe in a private collection since its creation in or around the early 1830s, only once having been shown to a specialist (the alchemical scholar Adam McLean in the 1980s) and which fact is mentioned by Professor Peterson in his edition of ‘The Clavis or Key to the Magic of Solomon’ a vastly erudite work on the transmission of Solomonic magical manuscripts from Ebenezer Sibley through Frederick Holland and Frederick Hockley through to MacGregor Mathers and his late 19th century edition of ‘The Key of Solomon the King’. 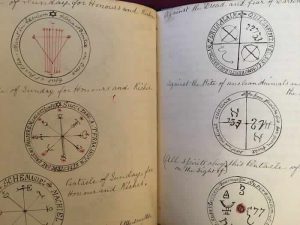 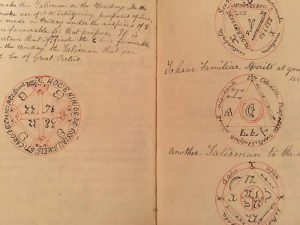 This is a scarce and important handwritten grimoire possibly copied from an earlier 18th century source, the authors own notes to the contents as well as its style suggests it is a personal copy not for circulation or even private viewing partaking of both the Solomonic grimoire tradition as well as the English ‘Cunning Man’ type of manuscript.

The ‘Edward Hunter’ of the title page may have been a Bristol based merchant and one who later had links to the Mormon groups in the United States, thus connecting two worlds between which the erudite Professor Joseph Peterson had suggested a link.

CONTENTS
The Dispositions required of a person wishing to partake of the Secrets
of the Cabalistic Science.

The Influences & Secret Virtues of the Moon

Of the manner of working the Figure, Talismans, Characters
& following the Rules of the Art

Of the proper Perfumes suitable to the Seven Planets

Of the Oraisons, Invocations & Conjurations for the days of the week

Of the Oraisons in form of Exorcisms, to Consecrate things
which serve to the Operations of the Great Art

The contents then deal in turn with the characters, precious stones, trees, perfumes etc for each of the
seven planetary days of the week