The Fourth Volume of Hell Fire Club Books Golden Dawn Facsimile Series. The first ever publication of an original ‘Ritual of the Portal Grade’, being a facsimile copy of the full Stella Matutina working extensively revised by Nevill Meakin (1876-1912). Frater Ex Orient Lux. Presented with an extensive critical and historical introduction by Dr. Anthony Fuller.

Allocutions to the Grade

and other supplementary material

as transmitted via the ‘Whare-Ra’ group 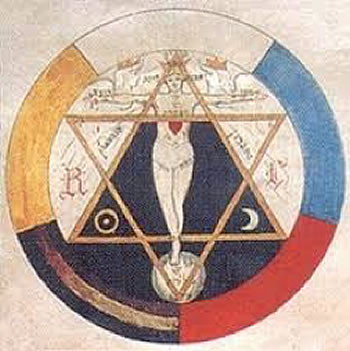 Limited to only 260 large format copies

The first ever publication of an original ‘Ritual of the Portal Grade’, being a facsimile copy of the full Stella Matutina working extensively revised by Nevill Meakin (1876-1912). Frater Ex Orient Lux

A full 74 page facsimile of the important Meakin document, with a 25 page full critical introduction plus supplementary ‘Allocution Papers’ to the Grade, with the previously unseen ‘Veil’ paper from the mysterious Cromlech Temple.

Presented with an extensive critical and historical introduction by Dr. Anthony Fuller, including facsimiles of a series of papers concerning the Grade written from 1894.

Also included is an original paper (‘The Veils of Negative Existence’) from the Cromlech Temple, which was an occult and mystical society established in Edinburgh (1913) and which was closely connected to the Hermetic Order of the Golden Dawn. 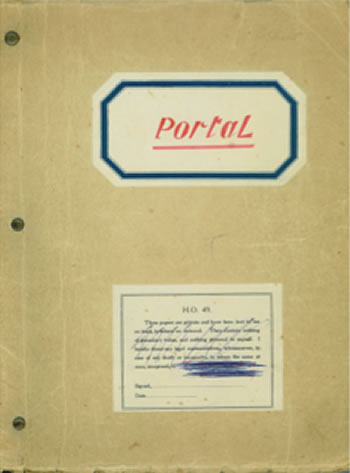 Cover of the Portal manuscript

This annotated Stella Matutina version of the Portal Grade differs considerably from the earlier Golden Dawn version and is regarded by authorities on the magical system to be far superior to the version left to us by MacGregor Mathers.

The scribe of this paper, Neville Meakin, was a senior adept of the Stella Matutina under Dr Robert Felkin in New Zealand, he was also associated, in his search for ‘Secret Masters’ (alongside Dr. Robert Felkin) with the magical teachings of the Iranian mystic Siyyid `Alí Muhammad Shírází (the Bab) whose ideas were transmitted through the Ba’hai faith. 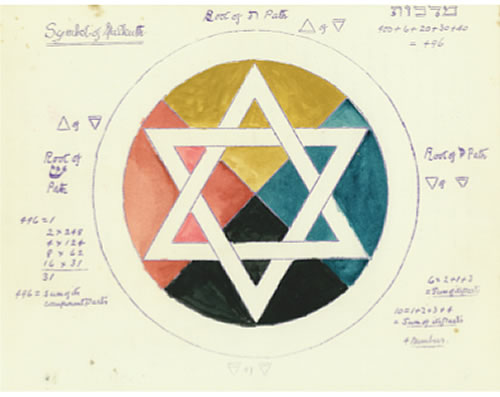 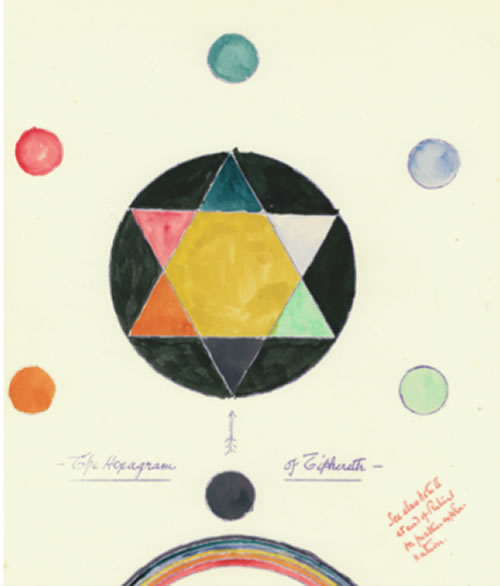 Dr. Anthony Fuller’s extensive critical introduction looks in depth at the unresolved mystery of where, and how, the Second Order (RR et AC) rituals and curriculum came from.

Examining and exploding the myth of S.L. MacGregor Mathers and the interlude of the ‘Paris adepts’, Tony Fuller looks in detail at the structure of the documents, their development and place in the curriculum of the Order:

‘…Without entering into the convoluted history of the Cipher manuscripts it should be noted that, according to Westcott’s diary, Mathers accepted Westcott’s offer to ‘work up’ the Cipher documents on 6 October 1887. The previous day Mathers had received Westcott’s letter saying, “I hope you will accept co-equality with me [i.e. as a Chief] and write it up with all your erudition if I do a simple translation of the cypher”.

The surprising implication that Westcott had not already done ‘a simple translation’ invites obvious speculation but, in any event, the date of this letter gave Mathers a four-month time-frame at most to write the five rituals and the eight papers- two of which were exceedingly complex- as well as interpreting and expanding the many crude diagrams contained in the Ciphers into the fully formed, and sometimes coloured, versions. This was a prodigious task especially when one takes into account the fact that expanding and constructing the rituals also entailed a significant understanding, and creative synthesis, of many disparate and complex occult symbols. These included the role played by the Enochian Tablets in the rituals, the invoking and banishing rituals of the Elements, and the Egyptian themes deployed both within the rituals and reflected in Temple furniture (e.g. diagrams on the two Pillars). It also required the judicious selection of appropriate passages from the Old Testament and Chaldean Oracles of Zoroaster. Indeed, designing and then making the Temple furniture and regalia (e.g. the Banners of the East and West, the sceptres etc.) must have involved considerable planning and effort, given that all this was completed by 22 February 1888, just four months after Mathers accepted the commission from Westcott.

The mystery grows considerably once we get to the Second Order, and the Portal Grade which acted as a bridge between the two Orders and effected entry into the R.R. et A.C.  …

… It is abundantly clear to anyone who studies the Second Order curriculum in depth, along with the earliest administrative documents, that it could not have been developed sequentially. Whether or not some later refinement, correction or elaboration was added after 1892 there is not the slightest doubt that the complete intellectual architecture of this comprehensive magical scheme had been fully developed by the time it was presented to the aspiring Adepts in 1891. The mystery, therefore, is where did this come from? To appreciate the enigmatic nature of the question it cannot be overemphasized that the Second Order teachings are an entirely unique synthesis of nearly every facet of Western occultism that manages to blend mythology, aspects of ancient occult teachings, alchemy, Gnosticism, Rosicrucian themes, Kabbalist teaching, esoteric Christian themes, and so forth, into a fully integrated and consistent whole. Necessarily, of course, one can easily discern within the Order material ancient, and even modern, influences and sources. But this is partly the point. It is the reinterpretation of such widely diverse material and its synthetic coordination into a coherent and practical system which demonstrates the extraordinary creativity of the Golden Dawn and the R.R. et A.C. …’       (Tony Fuller) 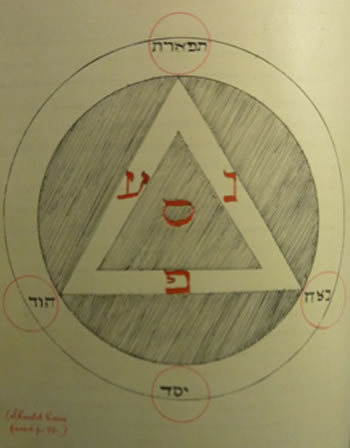 Lamen of the Hiereus from the Mathers version of the Ritual

The Hermetic Order of the Golden Dawn has increasingly attracted the interest of scholars who appear united in the view that it is ‘the most influential of all nineteenth-century occultist initiatory societies’. Notwithstanding this apparent concordance and the growing interest of academia in both the Order and the array of fascinating characters which made up its membership, surprisingly little attention has been paid to its documentation. Few attempts have been made to examine and evaluate its corpus and it remains the case that many scholars have been, and still are, dependent on published versions of Order documents which are often lacking in terms of both content and textual accuracy. This deficiency has contributed to a situation where, in the words of the foremost authority, Dr. R.A. Gilbert, “it yet remains as maligned, misunderstood and misappropriated as ever it was in its heyday”. Until comparatively recently a justification for this neglect might have been seen to lie in the perception by the Academy, and perhaps by the reading public also, that the occult was not a subject worthy of scholarly scrutiny. This attitude has changed considerably over the past three decades and with the ever-growing number of publications appearing on either the Order or its members this excuse has lost whatever validity it may have once possessed.

As part of an endeavour to rectify this situation the following volume is the first-ever publication of a facsimile of an original copy of the Ritual of the Portal Grade which was the intermediate connecting Grade between the First and Second Orders of the Stella Matutina, the largest and most successful of the three Orders which resulted from the schism of the Golden Dawn in 1903. It will be observed that the manuscript has many new details in text and diagram which are entirely absent from the transcriptions published in the works of Israel Regardie, the principal source consulted by modern scholars and occultists alike. Also published for the first time are several related Order papers on the Portal Grade, including facsimiles of a series of seven papers concerning the Grade written circa 1894 for members of the original Golden Dawn.

As will be discussed in greater detail in the next section of commentary, the Stella Matutina (S.M.) Portal ritual is quite different from that of the original Golden Dawn and it is perhaps an indication of the paucity of access to original documentation that this distinction is unknown to many who have published material on this Grade. Although the S.M. ritual embraces most of the text of the Golden Dawn version it was much expanded in the Stella Matutina and is considered by informed occultists and historians alike to be far superior to its predecessor. Indeed, whereas the former was evidently considered as something of an afterthought to the Golden Dawn First Order, and merely a prelude to the Second, it was given a high status in the Stella Matutina and regarded by both the Chiefs of the Order and the members who experienced it as a ceremony of such drama it was second only to the highly elaborate and impressive Second Order ritual of the Adeptus Minor Grade.

In 1986 Dr. Gilbert made the astute observation that “much remains to be discovered about the Hermetic Order of the Golden and many questions concerning the minutiae of its history… remain to be answered. But I suspect that further research will raise even more questions than it answers, and that when answers are forthcoming – all too slowly, for the Golden Dawn will not willingly yield up its remaining secrets- received opinion, both academic and occult, will rather be discomforted than well pleased. With the publication of facsimiles of these rare manuscripts along with, it is intended, a series of similar titles in the future covering the entire corpus of the Golden Dawn, it is hoped that at least some of the many outstanding questions about the Golden Dawn will finally be answered.

Whether such answers lead to further perplexity, as indicated by Dr. Gilbert, cannot yet be determined but they will clearly enable a greater comprehension and appreciation by modern scholars and occultists of this extraordinary society which is only now beginning to be understood in all its complexity.