Hieroglyphical Characters of all Nations by Moreau de Dammartin 1839

A rare and remarkable source for the
Tarot Major Arcana attributions 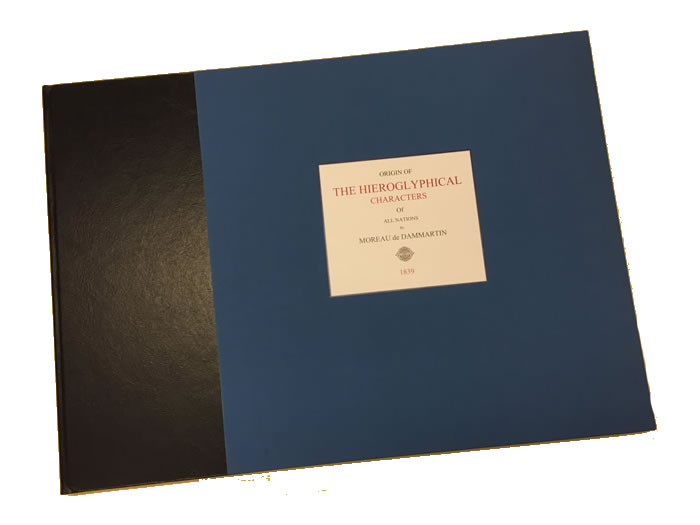 Printed onto high-quality vellum wove paper, with all 34 original plates reproduced directly from a surviving copy, reproduction in colour of the original paper wrappers front and back, full English Translation. 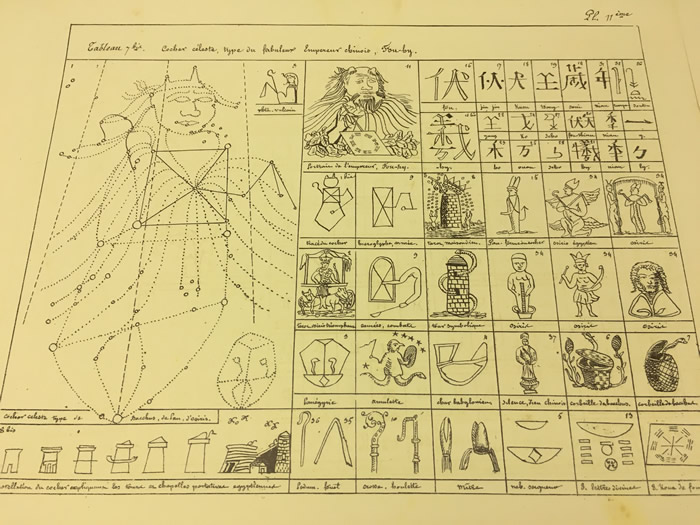 The system of attributing Hebrew letters and star patterns to the Major Arcana of the Tarot that is generally used today derives in the main from the writings of Eliphas Levi, S.L.Macgregor Mathers Aleister Crowley and the Inner Order papers of the Hermetic Order of The Golden Dawn etc.

The first real clue to the existence of such an initiated system of magic was given by Eliphas Levi in the middle of the 19th century.

Levis system was later worked out in skeletal form by the English Rosicrucian Frederick Holland, but few have seen his linear conceptual sketches. William Wynn Westcott later made another attempt at codifying the Major Arcana attributions and their origins in his ‘Tabula Bembina sive Mensa Isiaca’ an essay on the famous late classical Egyptophile bronze plate in Italy.

Click image to enlarge
Much of this material was codified in the late 1890s from papers written or compiled by S.L.MacGregor Mathers whilst he resided in Paris. Mathers himself took his first clues from the two Tarot attributions originally revealed by Eliphas Levi nearly fourty years previously, namely the attributions of ‘The Devil’ card (the Hebrew letter Ayin and its associations) and ‘The Chariot’ card (the Hebrew letter Cheth and its associations), and expanded this into an entire system projected onto the Tree of Life and thence projected in three dimensions into the aura of the Adept
on a cosmic scale.
Levis assertion that his knowledge came from the line of hidden adepts, that is/was quite literally the initiated knowledge has remained difficult to quantify, however, there is one clue he himself gives in a late chapter of his ‘Transcendental Magic’ where he refers to the system of attributing letters to the stars…. 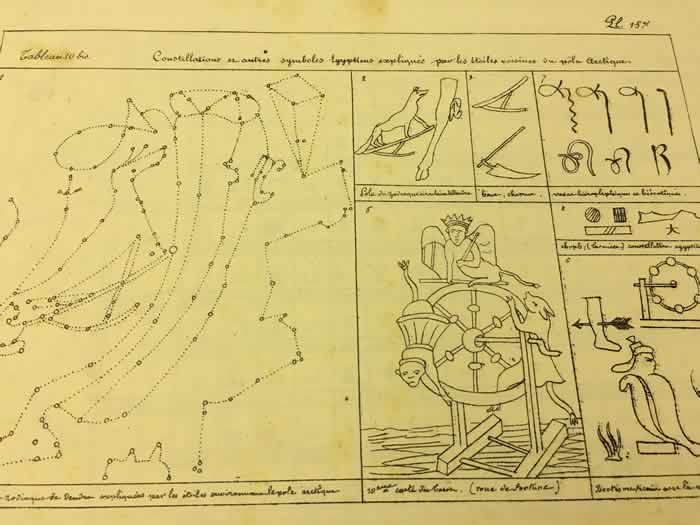 Eliphas Levi mentions the curious and fascinating essay of Monsieur Moreau de Dammartin which was published privately in 1839, a work which in fact deals intricately in both its text and its 34 detailed diagrammatic plates with the allocation of Tarot major arcana to the constellations and with the allocation of Hebrew, Egyptian, Phonecian, Samaritan, etc etc  alphabets to those very Tarot!
Moreau de Dammartins work is both rare (only a handful of copies are known to exist) and quite remarkable both for its specialised knowledge and its early date (1839), coming just one year after Champollions celebrated translation of the Rosetta Stone and amassing in one essay the authors studies in ancient alphabets, Tarot, American Indian petroglyphs and the Chinese astronomical system.
A.E.Waite who translated Eliphas Levis ‘Transcendental Magic’ must have been aware of the essay of Dammartin but may never have located a copy, no doubt the energetic Mathers followed Levis clue and from Dammartins plates developed his own paper ‘The Projection of the Tree of Life into a Sphere’ for the 5◦ = 6▫ degree of Adeptus Minor.
Click image to enlarge 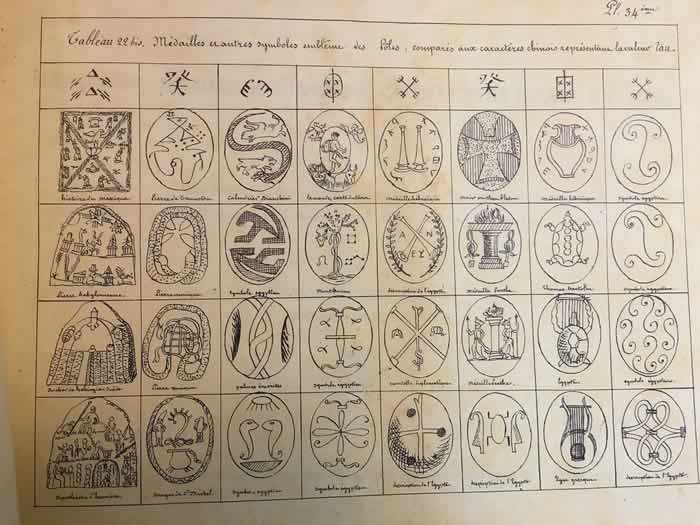 There is no doubt that Dammartins essay had a profound influence upon Eliphas Levi and from that original mind the ideas travelled further into the very structure of the Western Mystery Tradition.