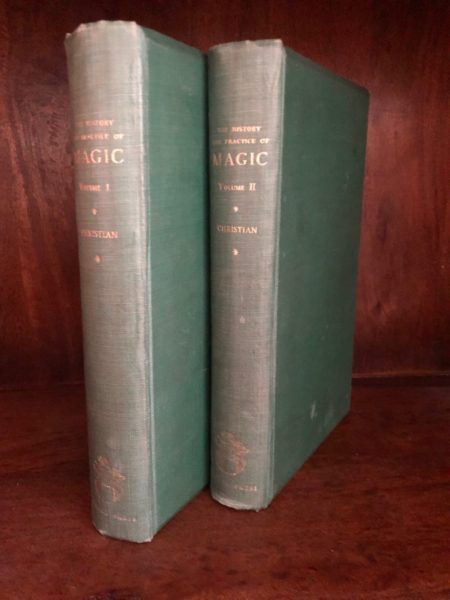 The first edition of this fully revised, modern English translation, of a work originally published in France in 1870 under the title “Historie de la Magie, du monde Surnaturel et de la fatalité à travers les Temps et les Peuples.” The original edition soon became considered as a standard reference work, and was amongst those favourably cited by Mme. Blavatsky in her “Secret Doctrine.”

This new English-language edition was put together with the assistance of many of the leading British occultists of the time (two of whom had been personal friends of Aleister Crowley) and includes revisions and supplementary articles by Mir Bashir, Margery Lawrence, and Julian Shaw and emendations and notes by Charles R. Cammell, Lewis Spence, Gerald Yorke, and Edward Whybrow.

The work is divided into seven main parts: the frst part, “At the Gates of the Supernatural” has 13 Chapters exploring ideas of magic in all ages and cultures; the second Part “The Mysteries of the Pyramids”, focuses on Egypt, with much on initiation etc. and traces the influence of Egyptian ritual from antiquity to modern times, Freemasonry, etc.; the third part is on The Ancient Oracles, the Sibyls and the Fates, and is largely devoted to prophecy, oracles etc.; the Fourth Part deals with “Magic from the Beginning of the Christian Era to the end of the Middle Ages,” the Fifth Part with “Supernatural Sciences and Curiosities” (material on witches, fairies, etc.); the Sixth Part the “General Theory of the Horoscope,” and The Seventh Part “The General Keys of Astrology.”

A good set of this uncommon work.