Manual of a Rosicrucian Philosophus 1797.

Legend of a secret alchemical tradition within the Hermetic Order of the Golden Dawn has persisted, from the earliest days members 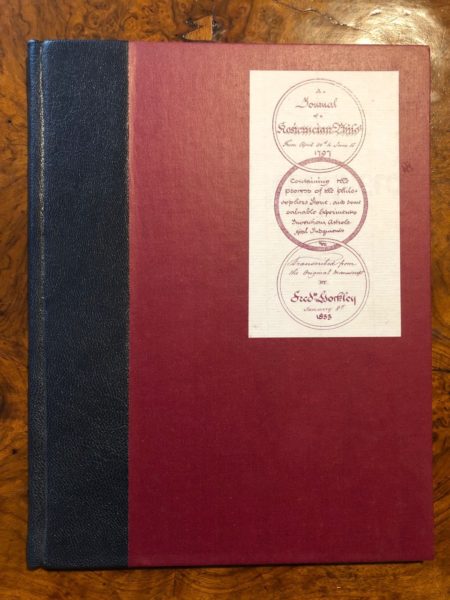 To the front board is a paper title label its design reflecting Hockleys’ characteristic interlinked circles on his title page, we announce:

Containing the Process of the philosophers stone, and some valuable experiments inventions, astrological ingredients &c

Transcribed from The original manuscript By Frederick Hockley January 8th 1833’

Legend of a secret alchemical tradition within the Hermetic Order of the Golden Dawn has persisted, from the earliest days members were devoted to the practise of a physical and spiritual alchemy that had its roots in the earliest Rosicrucian Societies. 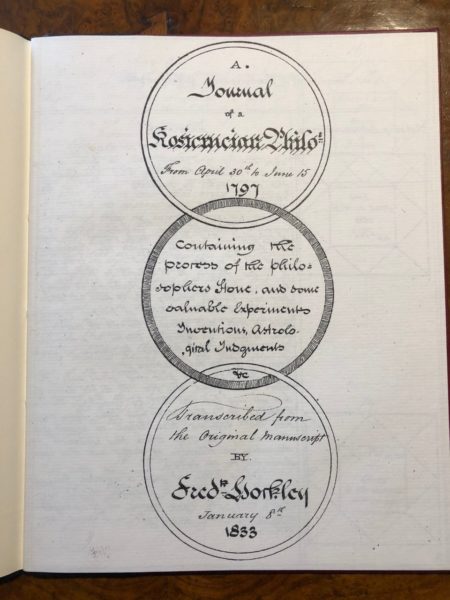 Reproduced here is Hockleys transcription series of alchemical experiments carried out in 1797 by Bacstrom, as part of his work in the Philosophus grade of Chazals ‘Society of Rosicrucians’. Each experiment is accompanied by an astrological chart and detailed observations on the material, apparatus, times and conditions of the work. Diagrams of the flask, burning lamp and seals convey the precision of Bacstroms approach, far removed from the vagaries of published alchemical treatises. 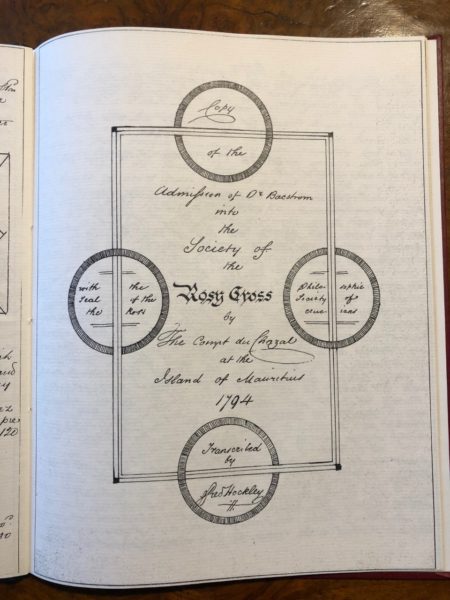 Stages of the work are clearly marked, dates and times for all the experiments are given with the positions of the planets at the time, the measure of heat used is given precisely, variations and alterations to the method and apparatus are noted carefully throughout.

The authors exhilaration at witnessing the ‘Peacocks Tail’ (the effective degeneration of the substance) and its producing a most wonderful display of bright colours which ‘..remain as brilliant as before..’ show that this work was clearly part of a much larger and longer series of experiments no doubt undertaken with the direction of his initiator into the Rosicrucian mysteries. 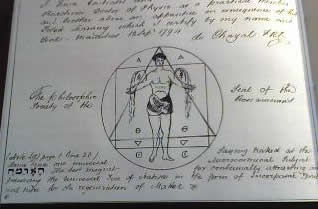 Bacstroms operations, of which we have Hockleys precise transcript, is an unique view into the inner world of alchemy as practised by the adepts before and at the inception of the Golden Dawn. Described by Fulcanelli as ‘Archimie’, it was a process of the exaltation of gold learnt from Yardley in 1716. But it was not only the philosophers Stone that these men were pursuing, in their search they sought the ‘Animal Stone’ a means of prolonging life, an inner alchemical process whose methods lie in the earliest teachings derived from the associations between organic life and the inner world of man.

This ‘Animal Stone’ is a precise operation involving much detailed and careful work, it is only given to members of the ‘Internal College’, the inner order of the Rosicrucian Society, and constitutes the real secret of inner alchemy transmitted through the ‘Gold un Rosenkreuz’ order founded in 1580.

An early member of the Golden Dawn, the Reverend Alexandre Ayton told W.B.Yeats that he had made an elixir of life which he had shown to a French alchemist, undoubtably Eliphas Levi who visited England for that purpose in 1861, Levi himself wote:

‘…I have seen the secret fire produced…I know what can be done with gold, but believe me when I say that I will never do it…’

Percy Bullock himself bought a copy of this manuscript, and showed it to A.E.Waite after Hockleys death, Waite mentions this in his book ‘The Brotherhood of the Rosy Cross’ where he refers to

‘… a very curious manuscript on diurnal proceedings in a laboratory undertaken for the purposes of the Great Work…..’

Appended to our Hockley manuscript on the alchemical operations, is another shorter piece, a certificate and relation of an initiation into the Rosicrucian Society, being:

By
The Compt du Chazal
At the Island of Mauritius
1794

This short document is again an important artefact in its own right, and a link in the chain of initiation from the earliest European Adepts through to the founders of the Golden Dawn and all those it has influenced up to the present day.
The ancient charges of the Roisicrucian Society are given in full, in a style both simple and sublime, equally respecting the admission of male and female members into their ranks who are desirous of performing the Great Work.

At the end of the certificate is the ‘Seal of the Society of the Rosicrucians’, an image of angelic transformation, a circle squared and the perfection of the elements ‘…the best magnet for continually attracting and preserving the Universal Fire of Nature in the form of Incorporeal Spiritual Fire for the regeneration of Matter…’