The Goetia
annotated by Aleister Crowley

The Grimoire of Pope Honorius

A matched binding of burgundy goatskin with matching endpapers and headbands

Bearing the Seal Of Astaroth 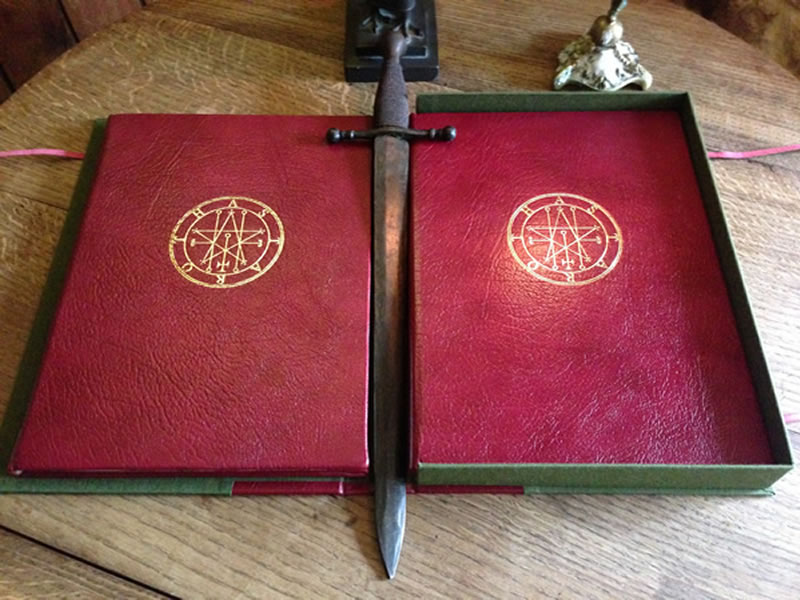 titled in gold to the spine. The whole designed to lay flat like a medieval book.

LIMITED TO ONLY  14  BOXED SETS

The text is a facsimile of Crowley’s personal copies of the 1904 first edition reproducing the substantial annotations therein. These commence with three pages carrying Gerald Yorke’s notes. The Preliminary Invocation or Bornless ritual is given twice. The first reproduces the text from Crowley’s vellum bound copy, the second presents the text from Crowley’s camel hair bound copy which has a different set of annotations. These will be important for anyone studing the genesis of Liber Samekh.

The Introduction has two additional annotated footnotes by Crowley. The text of the Goetia itself, has seven illustrations of Goetic demons by Crowley, plus some additional annotations. There is then a two page list in the hand of Gerald Yorke giving the appearance of the demons from the Bagh-I-Muattar plus Crowley’s sources for that material. Finally there are three pages of Enochian Calls in the hand of Leah Hirsig plus a pages reproducing talismans from Crowley’s Temple of L.I.L. in Mexico. Crowley’s annotations reveal potent A.A. & OTO magickal formulae, which later were given form in the instructions of “Liber Sameckh” & “Liber Pyramidos”, and which shed much light on Crowley’s later sex magick practices. This very rare edition of this important grimoire, would make a magnificent addition to any Thelemic or occult library.

Colour reproduction of nineteenth century Grimoire or Book of Spells of Pope Honorius, once in the personal collection of Frederick George Irwin – a prominent fringe freemason and member of the ‘Society of Eight’ precursor to the Societas Rosicruciana In Anglia and the Hermetic Order of the Golden Dawn. Irwin was an associate of Hockley who appears to have had this English language translation prepared from French originals of Honorius and the ‘Collection of the Secrets of the Magic Art’ of one Guidon, which draws heavily upon the Grimorium Verum and the ‘Pacts’.