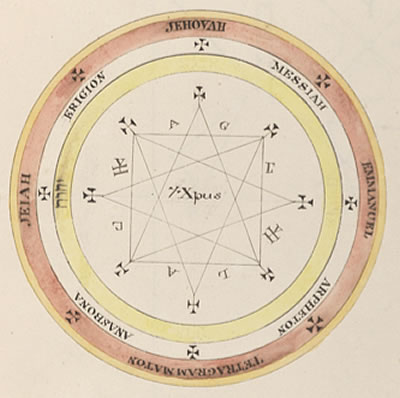 Frederick Hockley (1809-1885), was an occultist and Freemason with an interest in Spiritualism who in later life was associated with the S.R.I.A. or Societas Rosicruciana in Anglia.

Hockley’s peers considered him to be one of the great occult scholars of his time in fact he was held in such high regard by one of the founders of the Golden Dawn, W. Wynn Westcott, that he posthumously claimed Hockley as one of the Order’s most outstanding Adepts.

Unlike some of his other manuscripts, which were commissioned for sale by the bookseller John Denley, this was presumably prepared by Hockley for his own use, various pencil markings and spirit drawings of seals suggest that it was a private manuscript in which he recorded his own early adventures into workings with planetary spirits and entities from the Goetia.

Following his death most of Hockley’s library was acquired and dispersed by the occult bookseller and publisher, George Redway. The main sale catalogue was Redway’s “List of Books Chiefly from the Library of the Late Frederick Hockley, Esq., Consisting of Important Works Relating to the Occult Sciences, Both in Print and Manuscript,” George Redway, London, 1887.

Our manuscript facsimile produced here is a significant early piece of Hockley material in that it shows not only the broad mass of earlier ‘cunning man’ and ‘Solomonic’ material to which he had access and from which he made his own selections and fusions of material, but suggests also the practical magical work being undertaken by him prior to his spirit actions with Emma Louise Leigh in the 1850’s.

Pencil notes in the ‘Magia de Profundis’ manuscript include a ‘tree alphabet’, a type of ancient ogham or Druidic script borrowed perhaps from welsh or west-country sources, various ‘vortex’ drawings of planetary spirits which suggest Hockley’s own spirit or psychic interactions with these entities, as well as ‘kamea’ or number squares of the planetary powers where the energies being described act less as the direct talismanic structures we are used to seeing from Agrippa onwards and more in the form of whirling manifestations of force.

Later in the manuscript is a series of traditional ‘kamea’ with their respective planetary talismans, the young Hockley was clearly expanding these horizons… 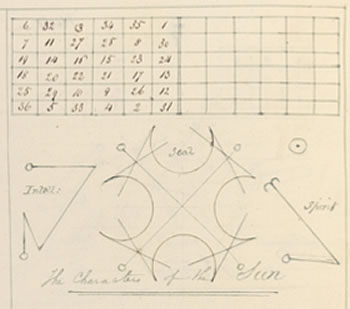 Hockley commences his manuscript with selections from the Goetic list of spirits, the incomplete seals pencilled in against coloured rectangles denoting their rank and agency, at the rear of one of the leaves is a set of swirling figures showing the actions of the planetary intelligences upon the material plane.

These swirling figures have little in common with Agrippa or those in the ‘Magus’ of Francis Barrett (1801), they seem to prefigure the later Victorian psychic or automatic drawings of spirits and elemental forces. 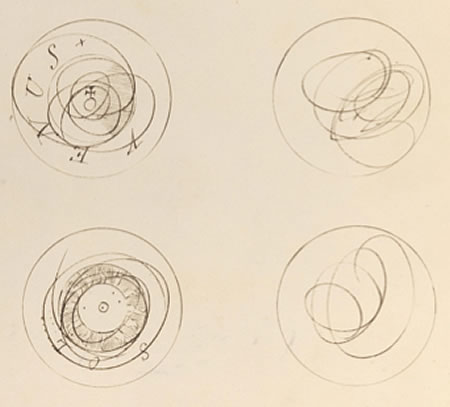 Were these seen in the crystal with the use of a seer as Hockley advised in his later career? Probably not, the more likely explanation is that these were seen in his minds eye as the direct result of private magical workings.

In this sense what we have before us is therefore a uniquely personal work, in its amalgamation of material from different sources, and in the presence of personal spiritual annotations of the kind described above, we can see the young Frederick Hockley (at this point only nineteen or twenty years of age) engaged in the direct experiencing of spirit forces in the mind rather than in the safer mode of spirit communication via a crystal or with a seer.

Like many of Hockleys manuscripts, this one remained with him until his death in 1885, what experiments the young man engaged in we cannot be sure, but his legacy as a transcriber and transformer of magical texts remains with us to this day. 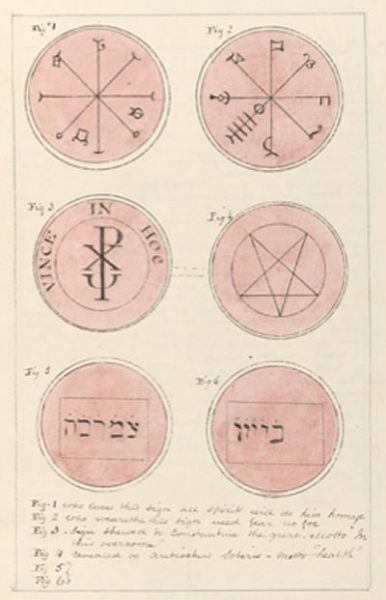 Selections of magical texts within the ‘Magia de Profundis’ suggest Hockleys youthful interests included witchcraft and the summoning of baleful spirits. Some pages are clearly transcribed after Reginald Scot (‘Discoverie of Witchcraft’) whilst others relish in the evil angels, one can see Hockleys’ pen luxuriate as he makes their seals. 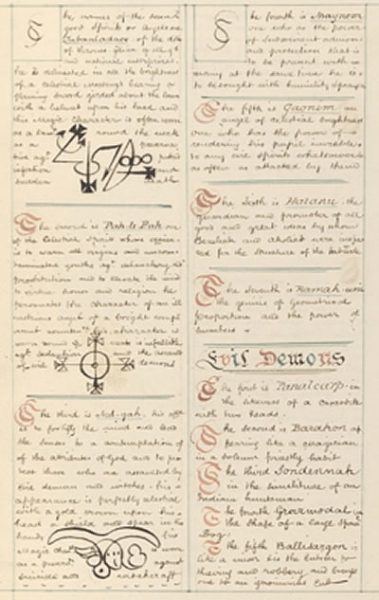 To the rear of the manuscript is a curious small selection of simple procedures which belongs rather with the traditional apothecaries and cunning men than it does in the world of ceremonial magic.

Operations for Love and ‘To make him unfortunate who has injured you’ etc etc. occupy several pages and are the result of the fusion of astrological and folk magics of the previous centuries. ‘To drive away beasts’ and ‘To know an absent persons health’, a ‘Curious secret to know another persons mind at a distance’ along with a preventative for vermin are a long way down from King Solomon it would seem, but we must accept, we have been made to accept finally, that the magical art came to us through the channels of common streams and the roots of things that grew far and deep into folklore and traditional medicine.

In the early 1800’s the transmission of magical texts was still largely reliant on a network of country physicians, apothecaries and cunning folk whose connections spanned the history and geography of Britain. 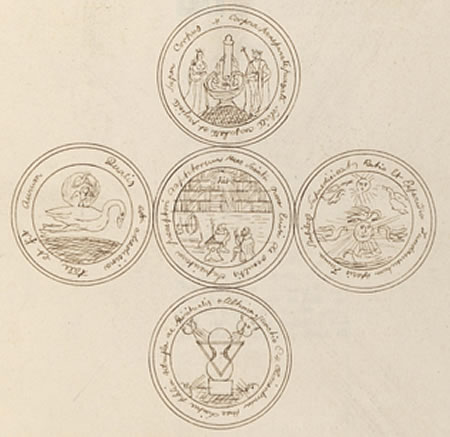 Hockleys drawings after an alchemical engraving

Their world moved more slowly true, yet the threads that bound them, the dissemination of astrological and almanack literature in a golden triangle from Wales and the West Country across to London and north to the county of Lincolnshire, joined together a hidden school which communicated as successfully through an early postal service as it did across the borders of the material and psychic planes. 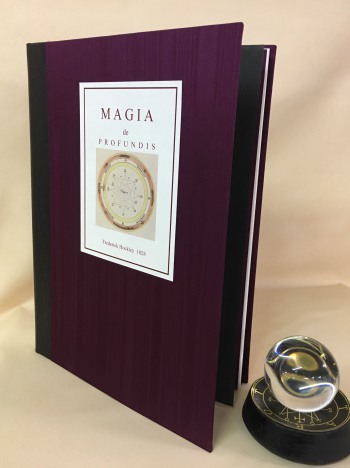