In full black kidskin bearing the seal Ankh-f-n-Khonsu to the titled spine and the seal of A⸫A⸫ with the four heads of the Kerubic angels to the front board. Marbled papers in a peacock design. 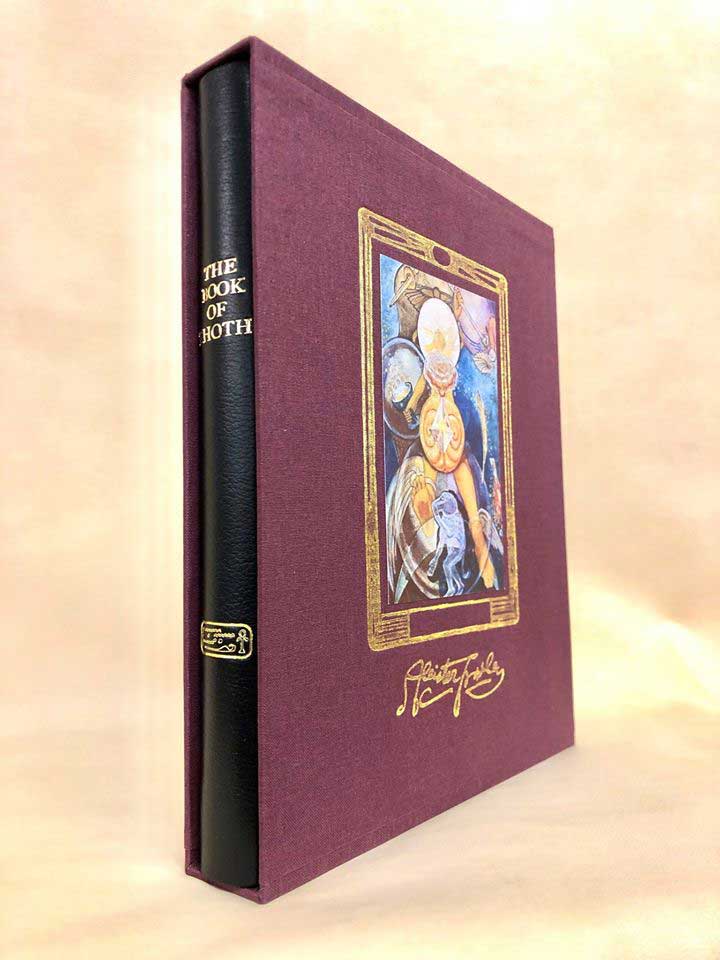 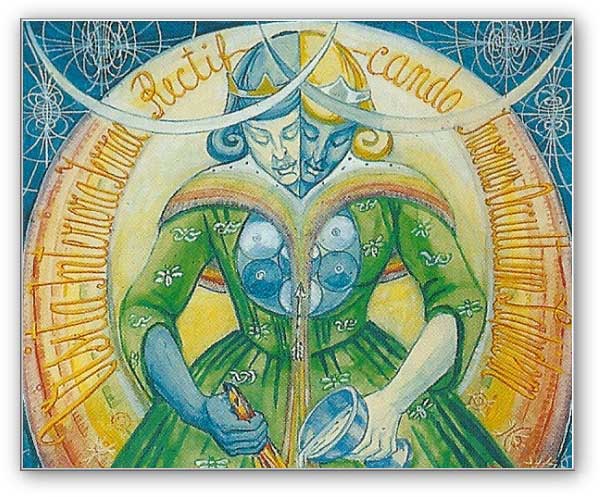 This edition consisting of
36 exemplars in full black kidskin bearing the seal Ankh-f-n-Khonsu to the titled spine and the seal of A⸫A⸫ with the four heads of the Kerubic angels to the front board. Marbled papers in a peacock design to reflect the connection between Crowleys Holy Guardian Angel Aiwass and the ‘Peacock Angel’ of Yezidi devil cult. 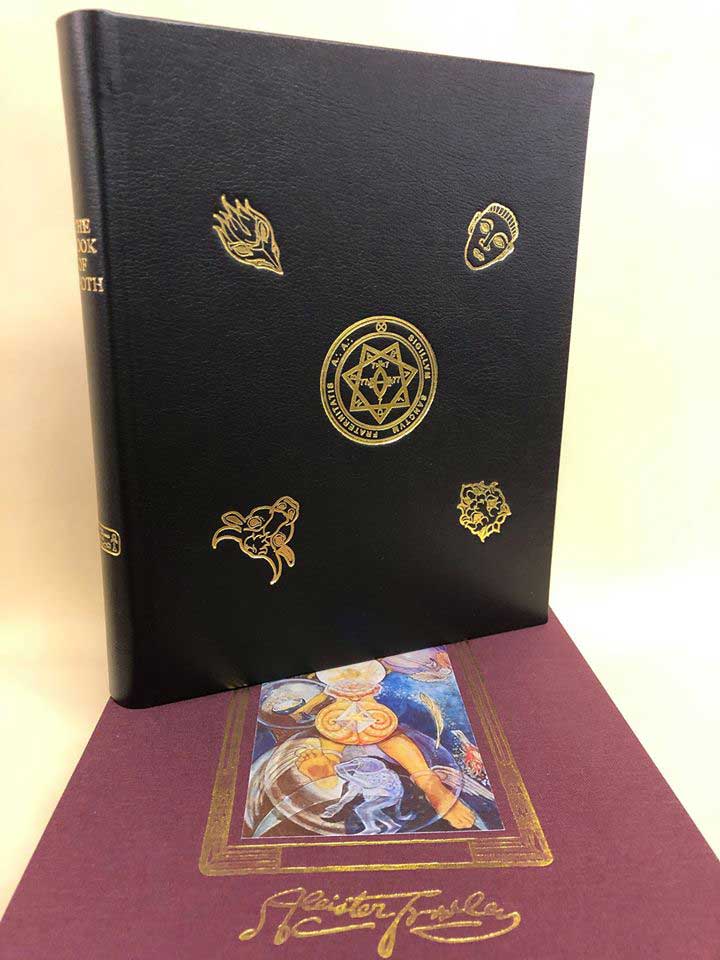 Slipcase bound in French linen with an inset reproduction of the famous ‘Magus’ variant card painted by Freida Harris suurounded by a gold border design of the Thoth Tarot deck. 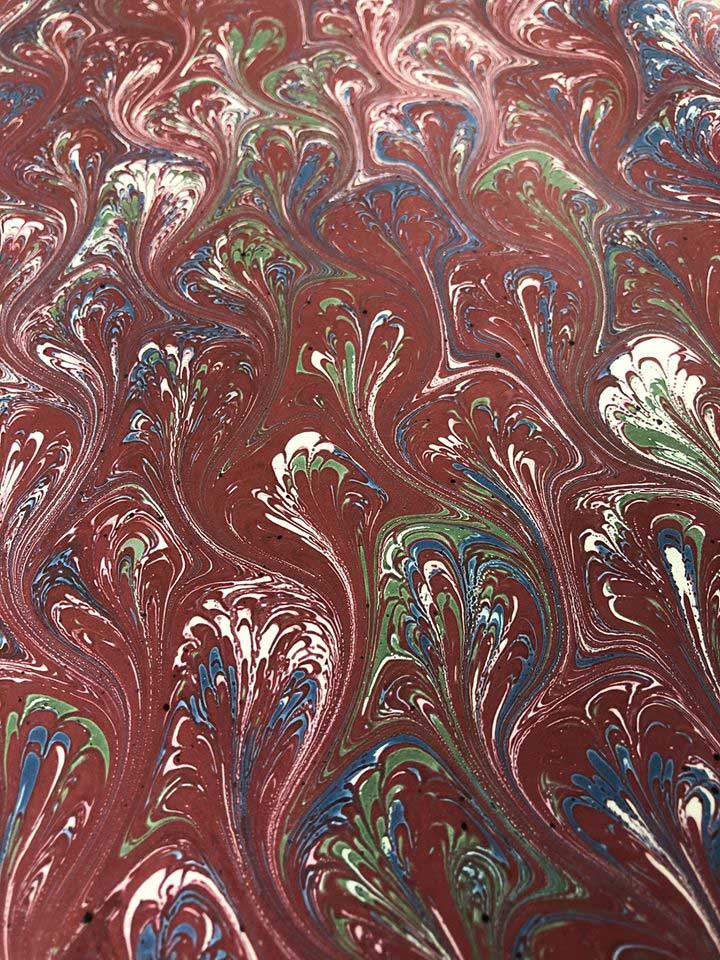 Each of the 36 leather copies of the book of thoth comes with a special edition
card ‘magus’ mounted on marbled card (200 x 140mm) with gold border. 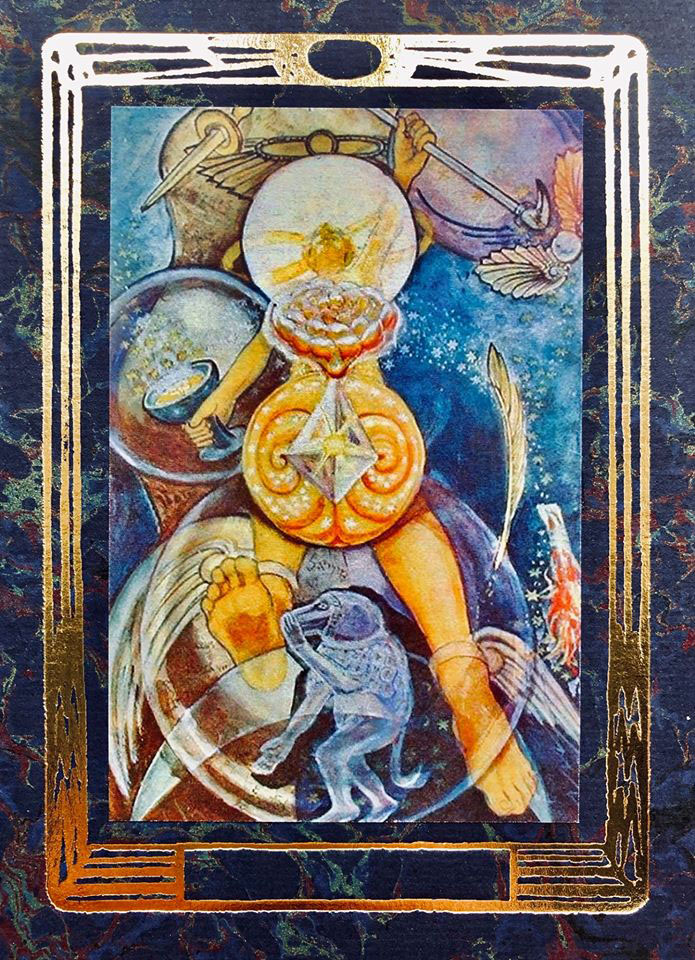 ‘She devoted her genius to  the Work..with inexhaustible patience..often painting the same card as many as eight times..may the passionate ‘Love under Will’ which she has stored in the Treasury of Truth and Beauty flow forth from the Splendor and Strength of her work to enlighten the world; may this tarot serve as a chart to the bold seamen of the New Aeon, to guide them across the Great Sea of Understanding to the City of the Pyramids…’  Aleister Crowley 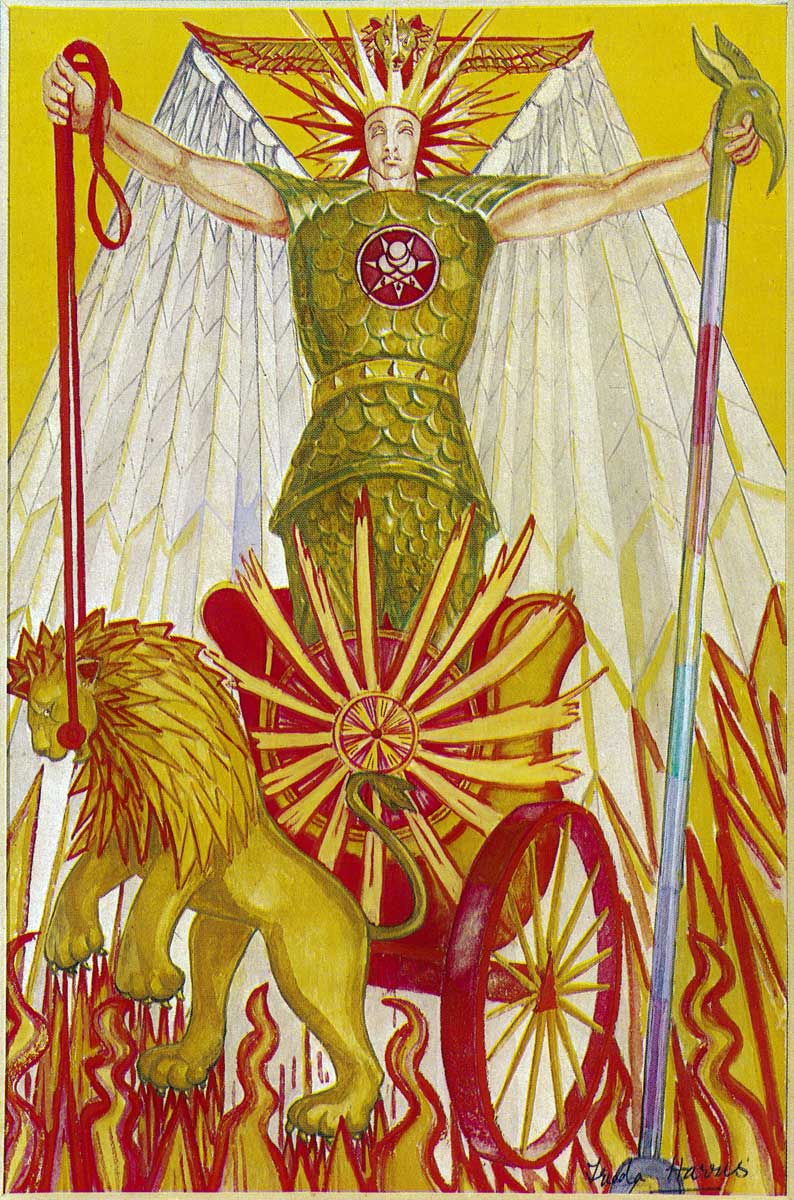 Aleister Crowleys brilliant Book of Thoth is an essay on the ancient Tarot as the ‘Book of the Wisdom of the Gods’ incorporating new ideas and discoveries in mathematics, science, philosophy, psychoanalysis and comparative religion. Behind the design of each card lay a lifetime of intense study and bold experimentation in the magickal arts. Crowley and his artist executant Freida Harris spent years refining the design of each card to draw out its full meaning, and into these are encoded a system of geometry and an iconography of cosmic import. 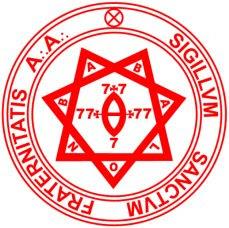 The Book of Thoth is the first and final classic of the Tarot. It is indispensable to all who all who seek to fathom the deepest wisdom of the ancients, and to follow the initiated tradition from the beginnings of history to the present day.

The book is divided into four major parts

Part One
The Theory Of The Taro

The Juggler card to The Universe

Selections on the Art from ‘Little Essays Towards Truth’, from ‘The Paris Working’
and from ‘The Vision & the Voice’

Part Three
The Court Cards, the four letters of The Name and the four

Part Four
The Small Cards, a full description of their symbolic and magickal significance.
Invocation &  Mnemonics. 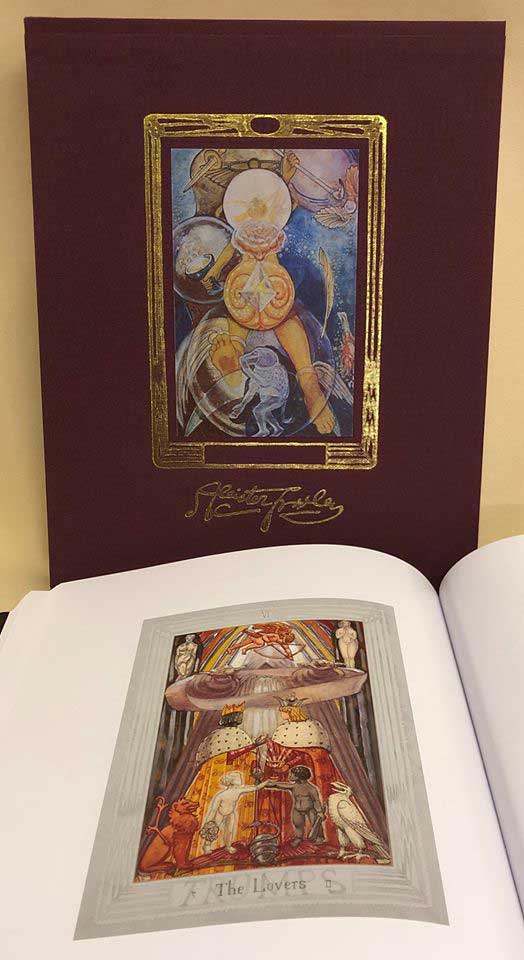 A further two appendices on the operation and behaviour of the tarot in divination;
correspondences and key scales, dignities, planetary powers, vital triads  etc etc. 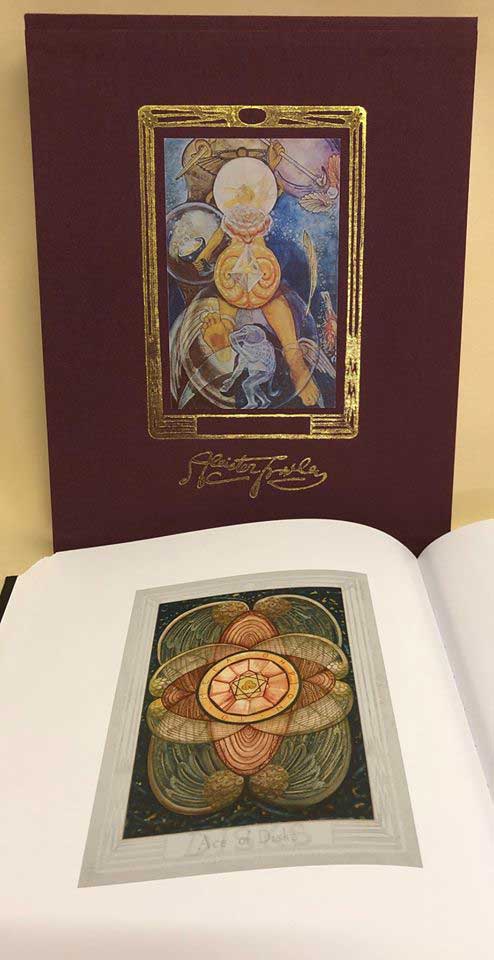 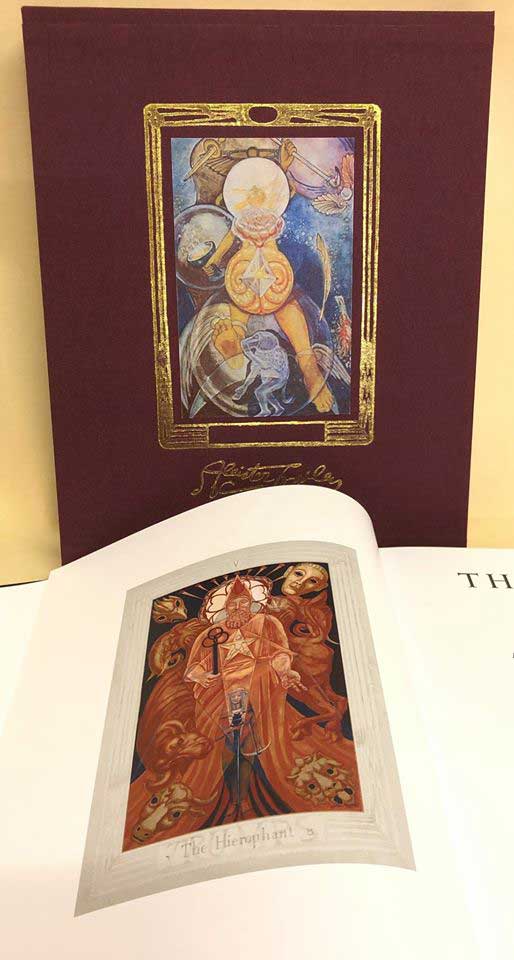