Issued by the Hell Fire Club in a Royal Binding in Antique Style. Of only twelve exquisite and talismanic copies. Inspired by the Song of Solomon

The Key of Solomon the King

Limited to only 12 copies 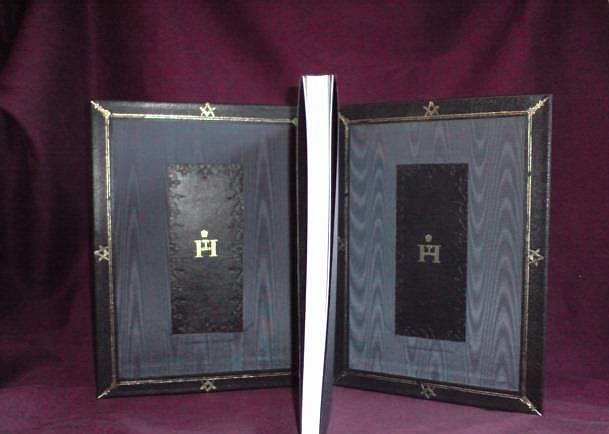 Of only twelve exquisite and talismanic copies

Inspired by the Song of Solomon

Ezekiels vision of the Temple Restored

The Book of The Key of Solomon
(Sepher Maphteah Shalomoh)

An exact facsimile of an original Book of Magic in Hebrew

Reprinted by the Teitan press in a limited edition

Only twelve copies have been bound by hand and talismanically inscribed with
the respective Zodiacal Spirit Seal from the manuscript copy of the Hebrew ‘Key’.

Constructed from a total of exactly 258  individual hand operations
(signifying by this the sum of the Hebrew word  H.I.R.A.M. legendary architect of the Temple of Solomon )
from the first stages of binding to the final gilding of the book in 22 carat gold.

‘..one of only twelve copies handbound for the Hell Fire Club..’

And signed by the binder with his title as Prior of the Knights of St. Francis.

Each Talisman is hand drawn in royal blue ink made from vegetable dyes, surrounded by an elegant border of leaves and scrolls, four Masonic squares and compasses, all in deep wine-red letterpress ink. The design of the vellum limitation label (which is carefully tipped into the inner page) reflects that on the front of the book and the inner covers.

We have made individual lead blocks from the gold tools used on the leather, the blocks were set into an antique printing press known as an ‘Albion Press’ and using a single motion of the printing arm to make each printed impression.

No images of these talismans have been reproduced here,
they will only be visible to the owners of each book.

The Key of Solomon

Each of the twelve copies is fully bound in Royal Blue oasis goatskin, dozens of individual operations spanning many hours of skilled work have gone into the form of the book, following this is over two hundred tooled impressions, making this the finest presentation of Solomons Key yet envisioned.

Period tools from the last quarter of the 18th century (roughly contemporary with the age of the original manuscript) have been used to decorate the work. These tools show some signs of age and consequently, the impressions they leave are individual to them, thus these twelve copies are both unique individually and distinct and irreplaceable as a group.

Genuine 22 carat gold, hand tooling both gilt and reflected in blind tooling (the making of reflected impressions in leather by impressing tools without gold), the use of the ancient art of letterpress printing have worked together to create a veritable talisman of the wisdom and arcane science behind the Temple of Solomon and the entire Western Mystery Tradition, in this name of H.I.R.A.M. invoked by the construction of the book itself.

The spine of the book is decorated after the fashion of an antique Zohar,  the leather carefully worked onto five raised bands which are laced into the boards of the book. These provide six distinct panels which each bear a royal crown in gold. Either side of the raised bands is a total of ten friezes gilt, deep borders of leaves and flowers of paradise. Double lines gilt to head and tail finish the decoration. To the book are rich woven silk headbands formed of alternate black and gold threads spun onto fine cane threads invented in historical bindings to protect the top and bottoms of the pages from the ravages of time. 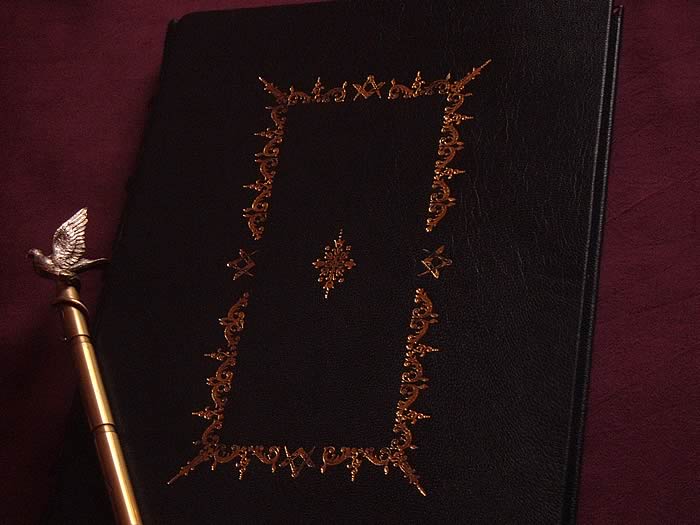 To the large front board is hand gilt a total of 49 individual impressions in 22-carat gold, a sumptuous panel (or ‘outer court’ of the Temple) of scrolls, leaves, and flowers of paradise. The centre bears a ‘Tree of Life’ branching out into four flowers indicating the four directions, the Four Worlds of the spiritual universe and the four Rivers of Eden .

Set into the border of this golden paradise are four squares and compasses, indicating the North, South, east and West of the Temple.

To the corners, reaching out into the deep of space are four irradiated stamens of ‘flowers of paradise’, with their petals and leaves furled back against the scrolls.

Upon opening the book we see a beautiful inner panel of moiré silk representing the waters of paradise, all surrounded by a gilt border of parallel lines all following around the leather jointed panel, gilt squares and compasses, finished to the corners with irradiated flowers of paradise. The inner cover is made handsome with a full leather joint pared finely to add both luxury and durability to the book, a style of binding reserved for the few.

Set as a jewel to the inside of this silk panel is a further panel of leather blind tooled with a border which reflects as in a pool the gilt impressions on the cover.  To the centre of this leather panel is hand gilt in 22 carat the ancient Templar sign of the Triple-Tau surmounted by a royal crown.

The Triple-Tau is formed both by the letters of  ‘Templum Hierosalymos’ (Temple of Jerusalem) and acts as a secret key to the geometry of the ancient Seal of Solomon, or the hexagram. This Triple-Tau Key produces a marvellous array of 5 geometric figures (symbols of the elements as brought from Egypt by Pythagoras). Placed one within the other these provide a visual model of the heavens and the observed motions of the planets. This Key forms an essential part of the inner teachings of the Holy Order of The Royal Arch of Jerusalem, appearing on the members jewel with the inscriptions:

CLAVIS AD THESAURUM
(the key to the treasure)

NIL NISI CLAVIS DE EST
(nothing is wanting but the key)

Both front and rear inner covers of the Book of the Key of Solomon bear these panels tooled in blind and gilt, symbolising the doors, and doors within doors, of Ezekiels vision of the Temple of Solomon restored.

The blind tooling of these interior panels a response to the concept of ‘reflection’, of the upper and lower world meeting which is inherent in the geometry of the hexagram or Seal of Solomon.

Opening the books covers we are reminded of the mystical utterances of Solomons Song:

‘..your temple is like a split pomegranate’  (shir ha shirim asher li shalomoh  4:3)  which the Rabbis of the esoteric tradition interpreted as referring to the rapturous experience of the Shekinah (or feminine ‘presence of God’) within the Holy of Holies in the most secret part of the Temple, a cube of covered cloths reserved for the High Priest himself, where an occult communication with the divine would occur…

“…and he brought me there and behold a man whose face was like burnished copper, with a cord and measuring rod in his hands. And the man spake unto me ‘Son of man, see with your eyes, and with your ears hear, and set your heart to all that I am showing you…and he brought me to the interior of the Temple and measured the pillar of the entrance…and he measured its length to the face of the Temple, and he said to me  ‘this is the Holy of Holies’…”

Facing the interior panels is a sea of blue watered silk moiré, like the sound of rushing waters, was the voice of the angel who spoke to the prophet in his vision of the Temple restored.

Turning this page we delve into a dark and mist-filled space, the Holy of Holies itself, incense-filled, dimly lit by streams of gold and astral fire, forms melting in the gloom. Each sheet of this beautiful inner paper hand-marbled especially for this binding.

Beyond this darkness is the interior vision of the spirit:  in this case, one of the twelve zodiacal spirits, its talisman drawn upon finest calf vellum, laid against a sheet of pure brilliant white representing the purity of vision, and exaltation of the High Priest.

Within this book, this great talisman of the Science of H.I.R.A.M. and the Wisdom of King Solomon is present the legendary ‘KEY OF SOLOMON’ itself. A full facsimile of this now famous Hebrew manuscript impossible to obtain in the original edition.

The manuscript presented here provides numerous diagrams and occult seals not found anywhere else. Some of the material (the manuscript has been dated to the 1700’s) stems from known sources of a western nature providing an interesting insight into the ‘Hebrew’ magical tradition. Our document displays an ‘Almadel’ or complex tablet for conjuring angelic messengers, a type of magical device known from the early middle ages, as well as some material clearly influenced by the Heptameron of Pietro d’Abano.

Discovered by the original editor Hermann Gollancz in his father’s library and published in two separate short works (1903 and 1914) now unobtainable, the present publication reproduces both of Gollancz’s scholarly works upon the manuscript as well as an able introduction by the modern esoteric scholar Stephen Skinner.

A Summary of the Contents

‘… I beg and command anyone into whose hands this compilation may fall, that he will give it to no-one unless he be of a modest disposition, able to keep a secret, energetic in the pursuit of the work. And I adjure him by the living God, the creator of the universe, that in the same manner, he would guard his own soul, he will guard this book and not reveal it to any unfit person…’

On the Composition of the Divine Seal

Preparation of the Operator in this Art

Concerning the Nine Days of Preparation

Of the Blessing of the Salt

On the Place for Performing the Act &the Prayer

Concerning the Magical Weapons and Fumigations

Concerning the Almadel or Great Seal for Invoking Angels

On the Seals of the Twelve Constellations

Book of the Images or Degrees of the Almadel

Concerning the Images of the Night

Conjurations of the Powers by means of the Almadel

The Book of Light

Concerning the Spirits of the Air ruling the Days

Fumigations for the Conjurations of the Stars

On the Pantacles and the Garments

Conjuration of the Spirits

Names and Seals from the Book of Rasiel

Book of the Seal of Beleth

Angels of the Twelve Stations and their Conjurations

The Seven Planets and their Human Forms

Book of the 28 Houses of the Moon

Book of the Magical Operation of Simon Magus

Summary of Appendices and a Collection of Magic Secrets,
Attended by Numerous Diagrams, pages of Talismans and Magical Seals

A recipe for love by the Master Adriano

Recipe for seeing a Spirit in a Mirror

To escape from a Prison in a Magical Craft

On going through the Air in a Cloud

Seal of the Terrestrial Spirits

On binding and Subduing the Spirits

Demonstration of the Magic Circle

On Keeping a Spirit Enclosed in a Ring

On Seeing Spirits and Conversing with these

On becoming Invisible to Enemies

On Obtaining an Answer from the Spirits

A Lengthy and Barbarous Conjuration of the Spirit to appear in a human form and give answer to all that the operator desires.

Concluding the Manuscript is an appendix of occult operations containing amongst items of great interest:

The Magical Square of Pagtatron

To Have a King or a Ruler do your Will

The Mystic Alphabet or Characters of the Angels 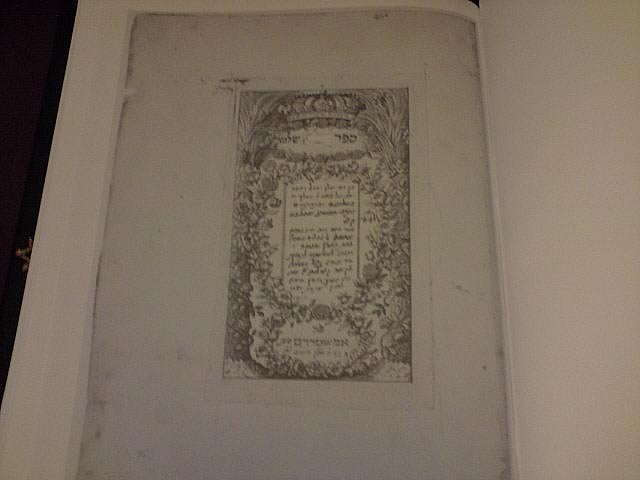