Goetia of Solomon the King. Ltd to only 33 copies

This edition is limited to 39 copies 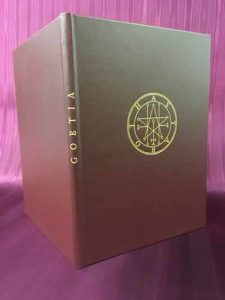 These editions are facsimiles of Aleister Crowleys own vellum-bound volume with annotations in his hand housed at the Warburg Institute University of London, containing copious notes, drawings of spirits and magical formulae both from Crowleys vellum copy and from a camels-hair binding copy owned by his friend and disciple J.F.C. Fuller.

The volume opens with a curious self-portrait of Aleister Crowley in his magical persona of ‘Perdurabo’, evoking the great demon Paimon to visible appearance, above him is inscribed his magical motto with the grade 5’=6’ of the A.A. magical tradition, derived in part from the teaching structure of the Hermetic Order of the Golden Dawn. Crowley shows himself holding the feather of truth, and wearing the symbolic horns and side-curl. Paimon is shown here as described in the Lemegeton, astride a dromedary rearing up out of the Triangle of art. Opposite the sketch is a series of notes dated to 1903 covering letter and number symbolism, below is a paragraph of notes by the collector and Crowley disciple Gerald Yorke (from whose collection the book originally came) detailing the history of the volume. 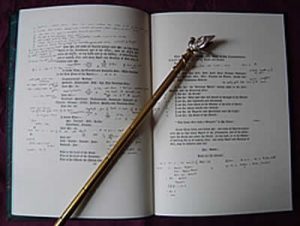 The ‘Preliminary Invocation’ of the GOETIA, used by Crowley to summon aerial spirits prior to reception of the Book of the Law, is heavily annotated both in the hand of Crowley and of J.F.C.Fuller. These annotations and ciphers reveal potent A.A. and O.T.O. magical formulae later given formal expression in Crowleys advanced magical instruction paper ‘Liber Samekh’ published in 1929 ‘Magick in Theory and Practise’, and in the ‘Liber Pyramidos’, both aimed at uniting the initiates consciousness with his Holy Guardian Angel through magical and tantric means. Much light is shed upon crowleys later teachings, a detailed study of these notes and their placement to the text shows the ideas breaking upon Crowleys mind. A lot of similarities are revealed between these psycho-sexual practices of Crowleys personal formulae and the inner spiritual teachings infused into the Golden Dawn by Crowleys friend and early mentor Allen Bennett, whose early G.D. paper on the ‘Bornless One’ shows Bennetts contributions. 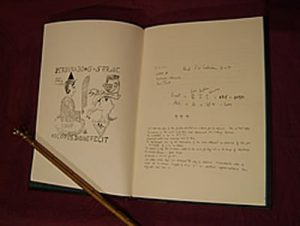 Throughout the rest of the work, Crowleys sketches of demonic entities jostle with the text, beings he saw and conversed with the press against the margins of the book as against the borders of the mind. Included in the annotations is Fuller’s inscribed copy of a series of demonic entities ‘…see by W.B.Yeats wife at a Ghost-Club dinner…’ and which were later printed in Crowleys pseudepigraphic ‘Bagh-i-Muattar’, the pornographic work dubbed ‘The Scented Garden of Abdullah the Satirist of Shiraz’ privately printed by Crowley in 1910 where he refers to them as the clairvoyant results of ‘…a well-known Irish lady…’ 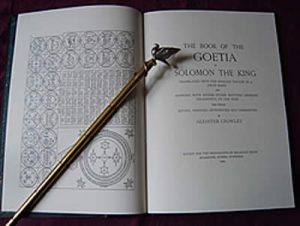 After the unique set of Enochian translations of the Goetic conjurations printed by Crowley at the rear of the volume, there are three pages of Enochian Calls in the hand of Crowleys mistress, the Scarlet Woman Aloestrael, or Leah Hirsig, inserted into which is a series of seven talismans used by Crowley at his ‘Temple of L.I.L.’ in Mexico.