The Pyramidos Ritual is a fundamental component of Aleister Crowley’s comprehensive system of magick. This truly original magick ceremony is an effective initiation ritual and forms a cornerstone in the practice of modern Hermetic magick.

A superb work on the magick arte with over 400 pages and diagrams, including 15 illustrations and a complete bibliography of references.

Published Vernal Equinox 2016
Bound in silver-grey cloth hardcovers, titles printed via letterpress then stamped in silver with the seal of the A.’.A.’.  black Fabriano endpapers, book printed onto quality paper with sewn sections.

Limited to only 93 copies 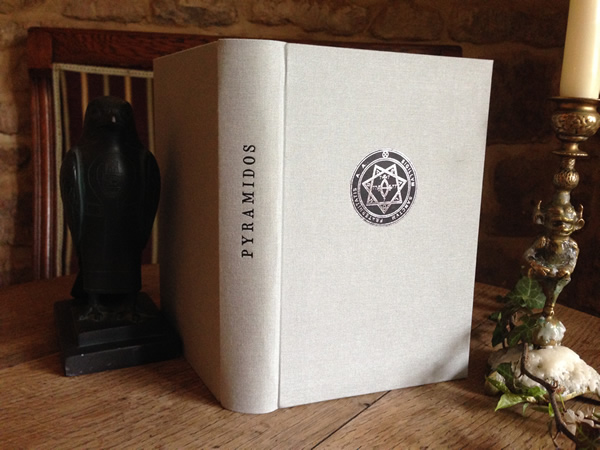 The Pyramidos Ritual is a fundamental component of Aleister Crowley’s comprehensive system of magick. This truly original magick ceremony is an effective initiation ritual and forms a cornerstone of the practice of modern Hermetic magick. The Pyramidos Ritual, based on the Neophyte initiation ceremony of the Hermetic Order of the Golden Dawn, is drawn on throughout the magical practices of the Great Beast 666, and is one of his most dynamic ceremonial compositions.

Pyramidos traces the history and development of this fundamental magical ceremony from its earliest origins in the famed Golden Dawn Cipher Documents, through Crowley’s first attempts to codify a system of magick in the Order of the Lamp of the Invisible Light to the final composition of the Pyramidos Ritual as the jewel in the crown of Crowley’s own magical order.

The Pyramidos Ceremony is included in its fully expanded form and the symbolism of the ritual is explained in detail. There is also a comprehensive examination of the Golden Dawn Neophyte Ceremony. Pyramidosis is a handbook for the performance of this central ceremony of modern Hermetic magick as well as incorporating several complete magick ceremonies which are discussed in the text.

Overview:
Pyramidos examines Aleister Crowley’s Pyramidos Ritual DCLXXI from its origins in the magical instructions of the Hermetic Order of the Golden Dawn to its use as the Neophyte Initiation Ceremony of Crowley’s magical order A.’.A.’.. The Golden Dawn system of symbolism is detailed to provide an in-depth description of the original ceremony of First Initiation upon which the Beast based Ritual 671. The complete text of the Pyramidos Ritual is included along with several of the earlier ceremonies that were incorporated in its composition. Pyramidos: Self Initiation in the Aeon of Horus includes 15 illustrations and a comprehensive bibliography.

Detailed Synopsis:
Part One is a detailed examination of the sources of the Pyramidos Ritual. It includes a comprehensive description of the Formula of Light that formed the basis of the magical ceremonies of the Golden Dawn.

Chapter One: explores the provenance of the Pyramidos Ritual with a history of the Golden Dawn Neophyte Ceremony and its associated instructional “Z Documents”.

Chapter Two: examines the Golden Dawn Z Documents in depth and explains their influence on the development of Ritual 671.

Chapter Three: gives a clear and detailed description of the Hall of the Neophytes of the Golden Dawn with complete explanations of the officers, stations, implements and ceremonial forms of the Neophyte Ceremony.

Chapter Four: is a detailed examination of the ceremony used for opening the Hall of the Neophytes by the Golden Dawn.

Chapter Five: explains the symbolism of the introduction of the candidate for initiation and his passage through the temple via the Gates of the Elements.

Chapter Six: is a detailed account of the closing ceremony for the Hall of the Neophytes of the Golden Dawn.

Part Two explores the influence that the Golden Dawn Equinox Ceremony had on Crowley’s magick and gives a detailed retelling of the Beast’s initial attempts to establish his own magical order prior to the establishment of Thelema with the reception of the Book of the Law in 1904.

Chapter Seven: explores the Golden Dawn Equinox Ceremony and provides a detailed description of its symbols and its influence on Crowley’s work.

Chapter Eight: provides a history of the Order of the Lamp of the Invisible Light which Crowley attempted to establish in 1900 and the influence that this had on the development of Ritual 671.

Part Three is a detailed explanation of the Pyramidos Ritual, beginning with the complete text of the ceremony. The symbolism of the ritual is given in detail and the preparations necessary for its performance are discussed in full.

Chapter Nine: The complete text of Ritual DCLXXI vel Pyramidos including all of the words, signs and visualizations necessary for its performance.

Chapter Ten: explores the symbolism of the Pyramidos Ritual, giving a detailed account of the meaning and the intention behind each step in the ceremonial performance.

Chapter Eleven: offers some guidelines for the student to prepare to perform this important ceremony.

“David Mattichak has passed away untimely after producing a magnificent and enduring legacy with his edition of Pyramidos. Whatever else one may say of it, it is one of the most important publications in Thelemic magic in a very, very long time. The Hellfire Club edition is a finely produced book, to a standard the most discerning modern bibliophiles will be pleased with…”

About the author
D.G. Mattichak Jr – Hell Fire Club Books bio
D.G. Mattichak Jr. is a well-known occultist with over 30 years of experience in the study and practice of Hermetic ceremonial magick. He is an author, freelance writer and blogger and has written extensively on many occult topics including Qabalah, Tarot, magick as well as Thelema and the Aeon of Horus.

David took up the study of magick in 1980 and started the elementary practices of A.’.A.’. in 1981 and began to work with the Pyramidos Ceremony at this time. His early study in magick encompassed a variety of disciplines including the Golden Dawn system of magick, Hermetic qabalah, Tarot as well as the Solomonic grimoires and an enduring interest in the Sacred Magick of Abramelin. In 1983 David found a simple solution to the English Qabalah of the Book of the Law and devoted several years to studying this fundamental book of Thelema, later publishing his findings in A Comment on the Verses of the Book of the Law (2010, Rose Dog Books).

Throughout the 1980s David was involved with the Australian Wiccan movement and was one of the original organizers of the Mount Franklin Annual Pagan Gathering. This great Sabbat has celebrated Beltane in rural Victoria in Australia for over thirty years, making it one of the longest-running Neo-Pagan festivals in the world.

An early interest in astral travel encouraged David to make a complete investigation of the twenty-two Paths of Sepher Yetzirah in 1996. These astral explorations of the planes that correspond to the twenty-two Tarot Trump cards resulted in a series of visions of the Paths which were published as The Sword & The Serpent (2012, Lulu).

In the past decade David has written on occult and spiritual topics for a number of publications and has been keeping a popular occult inspired website; AnkhafnaKhonsu Esoterica since 2009, providing in-depth discussion of the practice of magick, Thelema and occultism. Inspired by the growing interest in Aleister Crowley and his magick in recent years, David wrote Pyramidos: Self Initiation in the Aeon of Horus as a guide to using this classical work of ceremonial magick.