Egyptian ISIS origins of the Tarot and the Hell Fire Club.. “..The most curious and at the same time most complete Key to the Tarot, or a modern version of the famous Book of Thoth is found in the Isiac Tablet of Cardinal Bembo..”

Egyptian ISIS origins of the Tarot and the Hell Fire Club..

Printed and Bound at the HELL FIRE CLUB 2007…

“..The most curious and at the same time most complete Key to the Tarot,
or a modern version of the famous Book of Thoth,
is found in the Isiac Tablet of Cardinal Bembo..” 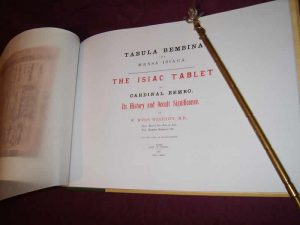 DESCRIPTION IN BRIEF: Enlarged facsimile of the 1887 edition including TWO new plates under protective glassine sheets:

i) Westcott’s original drawing of the Isis Tablet, housed at the Museum of Egyptian Antiquities Turin

Each copy having a hand-inscribed limitation label on Antique Fabriano Ingres paper ankh gilt to top, describing the contents
and numbering each copy in HIEROGLYPHS to one of the 42 Assessors of the Dead.

[Text drawn from the Theban Recension of the Papyrus of Ani discovered in 1888 and published by E.A. Wallis Budge in 1895.]

THE PLATES: Both plates are tipped-in and covered by protective glassine sheets.

i) ‘Tabula Bembina’: Westcott travelled to Turin many years before the publication of the book, his drawing of the bronze plate known as the ‘Isis Tablet’ may predate his meetings with S.L.MacGregor Mathers, thus adding importance to his early studies. Westcott’s own hand-drawn copy is strikingly beautiful, representing in great detail both the complexity of the design and craftsmanship of the original artefact, and Westcott’s integrity as an occult scholar and draughtsman. Throughout the sections of the plate, Westcott has very carefully inserted minuscule Roman capitals allowing the reader of his book to compare both his original, and the historical reproductions and engravings of the Isis Tablet and its relationship to the Tarot
which are here given in great detail.

ii) ‘The Temple of the Trionfi’: fold-out plate (400mm x 285mm), a never-before-seen design of the Egypto-Kabbalistic attributions of the Major Arcana, based upon the sketches and orally transmitted tradition deriving from Rachel Frances Antonina Dashwood-Lee (1774-1829), illegitimate daughter of Sir Francis Dashwood of ‘HELL FIRE CLUB’ fame, and herself author of numerous curious Kabbalistic meditations on the Psalms and the Hebrew language influenced by her fathers friend Robert Lowth, whose ‘De Sacra Poesi Hebraeorum’ sought to justify the divine origins of Biblical prophecy by analogy with the poems of Orpheus and the ancient mysteries.

Rachel Frances (‘The Infidel’)Antonina Dashwood inherited her father’s good looks, his flamboyance, part of his library (including his 1727 Agrippa, which contains Rachels bookplate as ‘Baroness le Despencer’) and some of his fortune, if not the family title. From an early age, she devoted herself to deep study of the occult arts, particularly in Hebrew and Greek, and founded “…a small society…” based at one time in Aylesbury, Buckinghamshire, then by the early 1800’s at Marylebone in London.

Rachel attended the lectures of Thomas Taylor (‘The English Pagan’) at the house of Flaxman, studying from thence the immense writings of Proclus on the Timaeus of Plato which is filled with obscure learning in the ancient Greek cults and practices of oracular rites. Though it is not now known whether Rachel Frances ever conversed with the poet William Blake (another attendee at the Taylor lectures hosted by Flaxman) her ‘Essay on Government’ (which was admired by Wordsworth) certainly shows many traces of Blakes political thought.

“…A magnificent witch she was..” said Thomas de Quincey, she was that rare and terrifying phenomenon:
a beauty who was also a scholar.

Rachels greatest legacy, however, was in the transformation of her genial and wayward father into a neo-pagan hero. After his death, Sir Francis Dashwood achieved his apotheosis in the soul of his brilliant but eccentric daughter, whose mixture of occult erudition, intellectual prowess and fierce loyalty transformed all his thoughts and deeds into legend.

In the ‘Temple of the Trionfi’, influenced by the Italianate Hermetic traditions of Ficino and Petrarch, Rachel Frances distilled her Kabbalistic meditations, her classical Greek scholarship on ancient mystery cults, and the inner traditions of
her fathers ‘Hell Fire Club’.

Those close to the Hell Fire Club today regard the ‘Temple of the Trionfi’ as unlocking both the mystery of the Hell Fire Club and its dealings with the spirit world, and gives the holder of its secret a direction to the ‘Inner Temple’ of the caves dug at West Wycombe by Sir Francis Dashwood in the last phase of the Clubs’ existence (1751-1768).

TEXT: The contents of the work comprises a superb monograph on the relationship of the Isis Tablet (a late antique cultic object?) to the origins of the Major Arcana of the Tarot cards, and opens up the possibility that a true ancient attribution of the Atus to the hieroglyphs of the sacred alphabet, and thence to the gods and the stars can be achieved.

Westcott investigates the artefact and discusses in detail the views of Athanasius Kircher in his ‘Oedipus Aegyptiacus’ Rome 1654, a work whose influence on Egyptian Freemasonry and esoteric thought is incalculable. Pignorius (1670) and Montfaucon (1715) are dealt with as well as the more obscure renditions and later engravings by less enlightened scholars. More importantly, Westcott expands on the influence of the Isis Tablet upon the French occultist Eliphas Levi (detailing the description and diagram given in ‘Historie de la Magie’) and noting the influence of it upon Kenneth MacKenzie (author of that catalogue of esoteric ephemera ‘The Masonic Cyclopeadia’, and probable author/copyist of the arcane ‘Cipher Manuscript’ which gave rise to the Hermetic Order of the Golden Dawn’)

Many very interesting conclusions will be drawn by attentive readers, the relationships between the text and the Tablet, alongside a reading of the material in the Golden Dawn Adeptus Minor curriculum are particularly rewarding.

Westcott’s handling of the Isis Tablet, with its sub-text of associations with the ‘Chaldean Oracles’ of the Julian Theurgists, allied to a perusal of the ‘Temple of the Trionfi’ will be of interest to starry and infernal adepti alike.

The book measures 418 mm x 288 mm and is hand-sewn overcast in a traditional 19th-century pattern. The end-papers are made of Egyptian papyrus specially imported, cloth-jointed and sewn-in.

The leather we have chosen is a smooth Spring Green basil which compliments the colouration of the papyrus and gives contrast to the texture of the endpapers and the fine Edwardian Canvas used for the sides of the book.

A blind double line tooled along the joint affected with a classic bookbinder roll made by Brooks of Grays Inn London
(circa 1860’s).