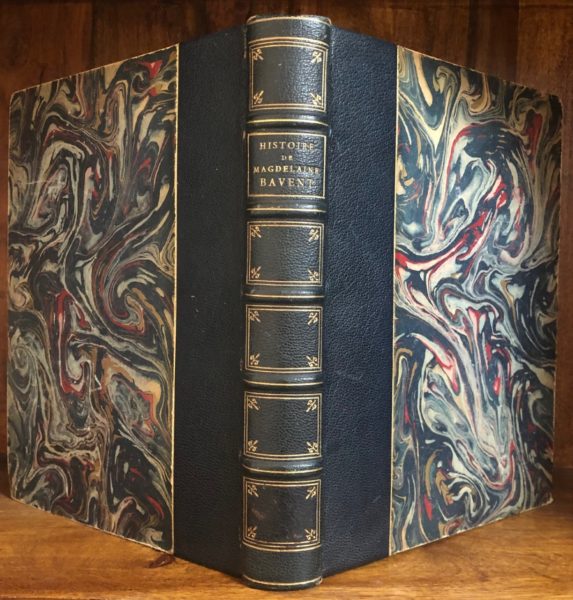 Complete collection of original trial and execution records and accounts of the case of Magdeleine Bavent, Urbain Grandier and the possessed nuns at Louvain  1652.

History of Magdeleine de Bavent, Nun of the Monastery of Saint Louïs de Louviers. With the general & testamentary confession  1652  and a complete Collection of fifteen original documents on the possessions of the nuns of Louviers.  Original documents 429 pp throughout. 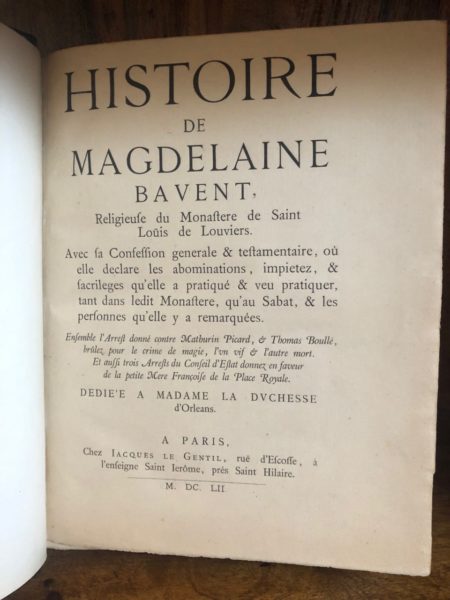 The case of the possession of the Ursuline nuns, in particular of Madeleine Bavent and the trial and execution of Urbain Grandier, the involvement of the demons Astaroth, Beelzebub, Lucifer and Leviathan made the case infamous both for its lurid sexual nature and the scale of heresy.

Half blue Russia leather, ornate ribbed back, gilded head. Table and bibliographical notes. Neat print on beautiful laid paper. (Some small rubs.) Very rare reprint of the original edition of the story of Madeleine de Bavent and a complete set of documents relating to the infamous Louviers affair. 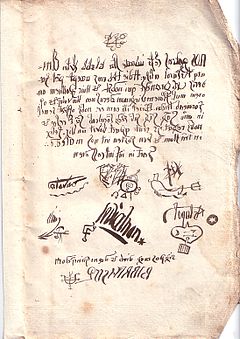 I: Examination of the possession of the nuns of Louviers. In Paris, 1643. By Doctor Yvelin. –

II: Response to the examination of the possession of the Religious of Louviers.

III: Censorship of the Examination of the possession of the Nuns of Louviers. S.l., (Paris), 1643.

IV: Apology for the author of the Examination of the possession of the nuns of Louviers. To Messieurs L’Emperiere & Magnart, doctors in Rouen. In Paris, 1643. (Attributed to Dr Yvelin). –

V: Responce to the Apology of the Examination of Sieur Yvelin, on the possession of the nuns of Saint Louys de Louviers. In Rouen, 1644. –

VI: Real account of what happened in Louviers, affecting the nuns. (Extract from a letter written from Louviers to an Evesque.) At the end: In Paris, by François Beauplet, given at the palace, 1643. –

VII: Veritable account of what happened at the Exorcisms of several Nuns from the city of Louviers, in the presence of Monsieur le Penitentiier d’Evreux, & Monsieur de Gauffre. In Paris, at Gervais Alliot’s, at the Palais, near the chapel. –

VIII: The defense of the truth concerning the possession of the Religious of the Louviers, by Jean Le Breton, Théologien. In Evreux, from the Episcopal Printing Office of Nicolas Hamillon, 1643. –

IX: Certificate of the Commissioners send by his Majesty to get acquainted with the matter, with Monsignor l’Evesque d’Evreux, of the state of the Nuns who appear agitated at the Monastery de Saint Louys & Sainte Elizabeth de Louviers, –

X: Minutes of the penitentiary of Evreux, of what happened to him in the prison, questioning & consoling Magdelaine Bavent, Magicienne, to Conversion & repentance. At the end: In Paris, by François Beauplet, 1643. By Delangle. –

XI: Letter addressed to Monsignor D. L. V., Doctor of the King & Dean of the Faculty of Paris, on the Apology of Sieur Yvelin, Rouen, 1644. (Attributed to Doctor Maignart). –

XII: Tractate of the marks of Possession & the proof of the true possession of the nuns of Louviers, by P. M. Esc. D. en M. Rouen, Charles Osmont, 1644. (Attributed to Simon Pietre, under the initials of his father-in-law, P. Marescot, squire, doctor in medicine.) –

XIII: Copy in the form of a recollection of what is made day by day in the monastery of the Relligieuzes daughters of Saint Louis, most of whom are mad, mistreat & torment the Devils. In this year 1643. (Bibl. Ste Geneviève, Mss H. F. n ° 34.) –

XIV: Anecdotes from the H. F. Manuscript n ° 34 of the Bibl. Ste Geneviève, forming a continuation of the previous piece. –

XV: Personal notice on Mother Françoise, Superior of the Nuns of the Place Royale, about the History of the Possessed of Louviers.